NYC Entertainment Venues Open With The Boss On Broadway, Foo Fighters At MSG, VMAs At Barclays

New York City’s big entertainment venues -- from the neon lights of Broadway to Madison Square Garden to the Barclays Center -- are reopening with high-profile events. In the past 24 hours, Bruce Springsteen announced he will re-open Broadway with a series of of “Springsteen On Broadway” concerts at the St. James Theatre beginning June 26, and this morning MTV announced its Video Music Awards (VMAs) will return to New York City with a live telecast from the Barclays Center on September 12.

The Foo Fighters, meanwhile, will reopen Madison Square Garden on June 20 with the arena’s first full-capacity show since March 2020.

“We’ve been waiting for this day for over a year,” said Foo Fighters frontman Dave Grohl. “And Madison Square Garden is going to feel that hard. New York, get ready for a long ass night of screaming our heads off together to 26 years of Foos." 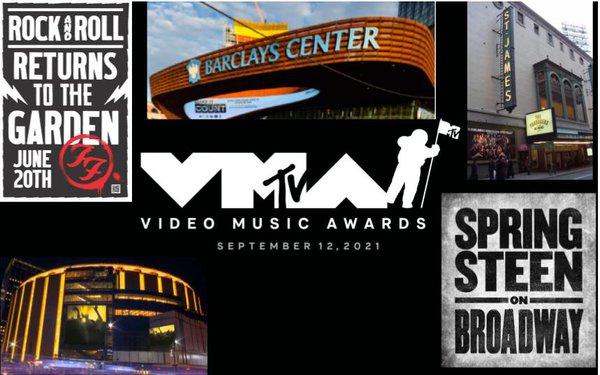