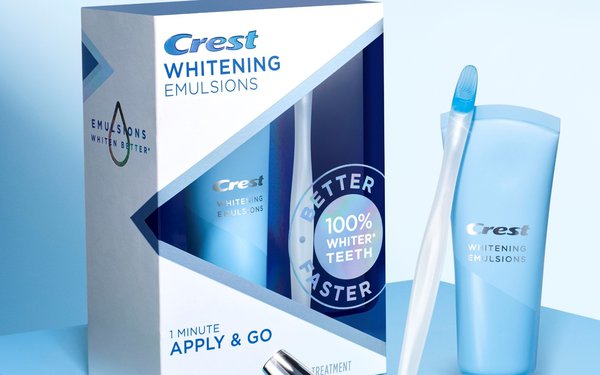 If that commercial is shown again to the public, however, P&G will make sure it abides by a recommendation, announced Tuesday by the National Advertising Division (NAD) of BBB National Programs, to “clearly and conspicuously disclose” that claims in the brand’s packaging and advertising are in comparison only to its own year-old ARC Teeth Whitening Pen.

On the other hand, the NAD did find a reasonable basis for P&G’s claims that Crest Whitening Emulsions provides “better” or “100% whiter” results, and that it “whitens better” than the ARC Pen.

The NAD’s recommendations came as a result of a challenge brought by competitor SmileDirectClub.

P&G stated that it “disagrees with NAD’s conclusion that certain claims were not adequately supported," but “as a strong supporter of self-regulation, we agree to comply with the NAD’s decision.”

Specifically, NAD recommended that P&G modify the brand’s claim of “faster," discontinue or modify its claim that the brand “stops stains before they set in,” and discontinue completely the following claims:

Crest Whitening Emulsions, said to be Crest’s first-ever “leave-on-teeth” whitening product, is comprised of a hydrogen peroxide gel in a tube and a separate applicator wand.

Despite its name, SmileDirectClub products are now sold through brick-and-mortar retailers as well as directly.