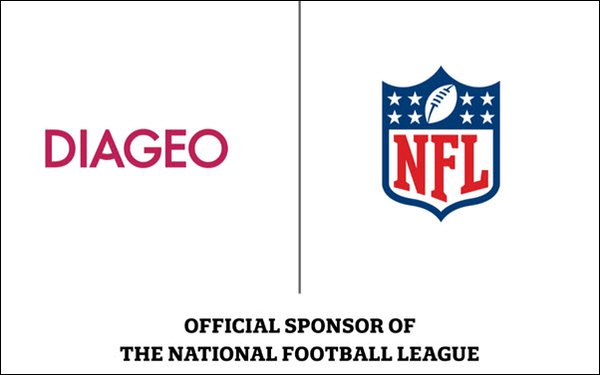 The National Football League has announced that Diageo will be its first official spirits sponsor.

In addition to broadcast TV ads and in-game exposure activations for its brands, Diageo will employ digital and social media marketing, promote the sponsorship in liquor stores, host responsible drinking programs, and sponsor this year's NFL' "Fan of the Year" contest.

The length and terms of the multiyear deal were not disclosed. However, an agency source cited by Sports Business Journal estimated the all-in cost at $30 million per year, with about half of that going to rights fees.

The deal does not include Super Bowl advertising, as Anheuser-Busch InBev continues to be the exclusive alcohol category advertiser for the game, noted SBJ.

But it does include international rights, starting with the 2022 season's NFL International Series games in London.

The sponsorship spans all of Diageo's spirits brands, but not Guinness beer. At least initially, Diageo intends to focus on Smirnoff, Crown Royal and Captain Morgan Spiced Rum.

The NFL banned spirits advertising until 2017, when Diageo’s Crown Royal whisky aired the first such ad, which focused on drinking responsibly.

Since then, Diageo has partnered with multiple NFL teams and stadiums. It has a dozen such sponsorships now, and is in talks to add more. Diageo was also first alcohol sponsor of NASCAR.

Nana-Yaw Asamoah, vice president of business development and sponsorship for the NFL, told CNBC that Diageo's commitment to messaging and marketing practices that promote responsible drinking was a driving factor in choosing the company for the league's first sponsorship.

“We always take the approach that we don’t have to be first, but we want to make sure to get it right,” he said. “After looking at other leagues and how they approached the spirits base and how we started in 2017 — in 2019 we allowed our teams to start having relationships with spirits brands, 20 of which have a spirits partner, so we really felt like this was a good time.”

"This is a perfect match," stated Ed Pilkington, chief marketing and innovation officer, Diageo North America, noting  the company aims to bring "programs and experiences to the NFL's passionate adult fan base, while continuing to use our platform to champion social responsibility in every way."

Like most other categories, spirits advertising took a hit during the pandemic. But it was up 20% in this year's first quarter, according to Kantar Media.