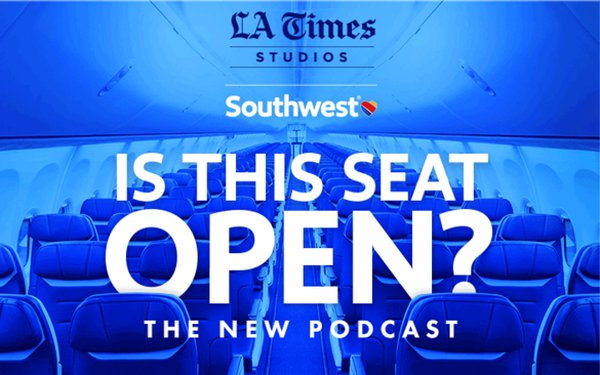 Southwest Airlines has unveiled a 20-episode podcast series titled “Is This Seat Open?”

Each episode features a person from the company, including gate operators, marketers and the co-founder, weighing in on the airline’s 50-year history. The title refers to the low-cost airline’s open seating policy.

The podcasts recount episodes, ranging from arm-wrestling competitions to planes full of dogs to one titled “Love in the Air,” about an in-flight marriage. But some are serious, including the story of a flight dispatcher working on 9/11.

The series, which launched on Tuesday, is available on all podcast platforms, and is featured on the LA Times site as paid content.

The offering comes as several airlines, including Southwest, Delta and American and Finnair, have cancelled their in-flight print magazines.

It is unclear if Southwest’s new podcasts are designed to help replace the magazine, but other airlines apparently are replacing print with digital.

For instance, American announced last week that it is retiring American Way, the title it launched in 1966, to concentrate on digital entertainment for flyers.

The airline offers a library of 600 movies and TV shows, and over 150 classes in creative, productivity and language via American’s new Lifestyle inflight entertainment channel.

Airlines have been hit hard during the pandemic, and may be eager to cut the costs associated with print magazines.