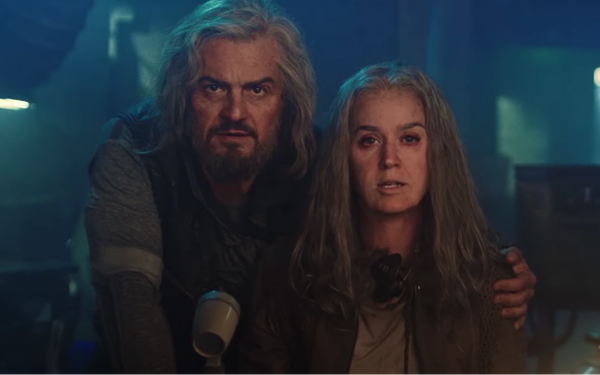 RepresentUs is taking over the NASDAQ, Reuters, and One Times Square billboards with creative starring musician Katy Perry and actor Orlando Bloom.

Footage will play on all three screens for 24 hours including a 5-minute roadblock during which the three screens synchronize to broadcast a single message from "the future” Thursday evening, mirroring a key scene in the ad.

The spot, “Transmissions from the Future” takes place in a dystopian future — 2055 — where the voting rights bill For the People Act has failed.

The video supports the passage of the bill as it heads to the vote in the Senate next week. It is the centerpiece of RepresentUs's “While You Can” campaign, referring to the urgency of calling senators.

The effort includes social media posts from celebrities and influencers including Lizzo, Kerry Washington, Laura Dern and MTV News. It was created by Oxcart Assembly and was written by Ted Sann, former BBDO chairman, and chief creative officer.

The bill aims to protect voting rights by creating safe and accessible elections, preventing billionaires from buying elections, and ensuring voters can elect leaders who govern in their interests. It also directly tackles the 389-plus bills that have been introduced since March in 48 states to restrict the freedom to vote.

Both Bloom and Perry donated their time to ensure the passage of this bill, which 70% of Americans support.

“You are our only hope. The America you know doesn’t exist in our future. Democracy is dead. We have no voice,” an older, disheveled Bloom says in the ad, broadcast from the year 2055 to the present, from an underground bunker where he and Perry are attempting to signal back to 2021.

“It started when voter suppression ran wild all over America. The voting rights bills died in the Senate. Polling places closed. We lost our right to vote,” a white-haired and fearful Perry warns Americans in the video.

RepresentUs is asking viewers to call their senators and ask that they pass the For the People Act. The group has created an online resource hub to help volunteers.