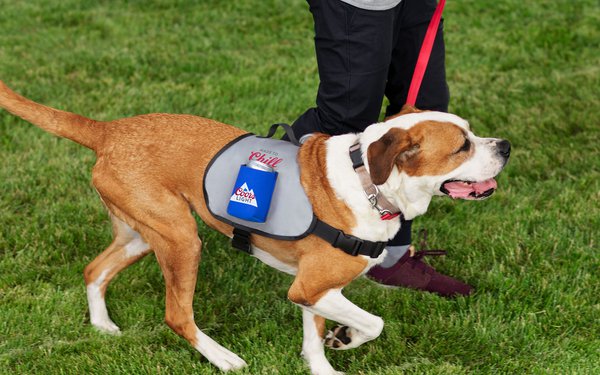 Above, a Coors Light beer holder -- perfect for the pooch who's secretly longing to be a Saint Bernard.

Merchandise sporting beer brand logos has been around since probably the first days of brewery sales to taverns. Antiques sites abound with branded beer trays, steins, openers and the like dating back well over a century. Those items were marketing tools, given to bars to serve as free advertising for beer brands.

Sometime several decades back, however, beer-branded items left the strictly promotional arena and became clothing and accessories that consumers would actually buy in order to show off their personal choice of suds.  The field also became big business, with at least one site -- wearyourbeer.com – focusing on nothing else for the past decade.

Why do people buy these items? Having only worn promotional items when we got them for free, we’re in the dark here.

But we have noticed that beaches in particular -- and summer in general -- seem the places and season when such fare is totally acceptable. So Budweiser, for example, launches a merchandise collaboration every summer to, in the words of a spokesperson “help consumers and Bud fans get in the summer spirit.”

This year, for consumers “to reconnect again over a cold beer and celebrate iconic summer moments,” Bud has teamed up with surf clothing specialist Billabong  not only for boardshorts, T-shirts, button-down shirts, jackets, fleecewear and hats, but also towels and coolers.

Speaking of coolers, Coors Light has just released a “Hold My Coors” collection, which is all about, well, holding your Coors. The product line, though, doesn’t include coolers, but goes for a light touch with a “House Plant Beer Holder,” a “Man’s Best Friend Beer Jacket,” a “Softball Mitt Beer Holder,” a “Chill Master Grilling Apron,” a “Beer Holder Hoodie” and -- our favorite -- a “Beer Holder for the Shower.”

Then, there’s the Beer-Bell, an upcoming $45 dumbbell-shaped drinking vessel that makes beer drinking into a mini-workout -- or, as the brand’s website puts it, provides “a great way to build up your beer-ceps.”

Dave Watson, co-owner of Beerco, the venture behind the Beer-Bell, told Marketing Daily to expect the product in late fall, both direct to consumers online and through distributors and retailers in the gift and trophy category.

The Beer-Bell, which Watson says will be promoted on social media and through both beer and fitness bloggers, has a pre-weighted base of 1.5 pounds and holds 1.2 pounds of any liquid refreshment.

The product includes space for personalized engravings -- or for company branding. The partners have already made inquiries along those lines to Budweiser, other big breweries and craft breweries, Watson said.

The “Billabong x Budweiser” collection is available at Billabong.com and “select specialty retailers.”

The “Hold My Coors” collection is available from a newly launched Coors Light merchandise site (Shop.CoorsLight.com).

Billabong x Budweiser has also released a video featuring Eithan Osborne of the former’s surfing team spending a day in Ventura, California, with music by surf punkers The Paranoyds.