Match's Wedding Singers Beg You: Hook Up, Get Hitched 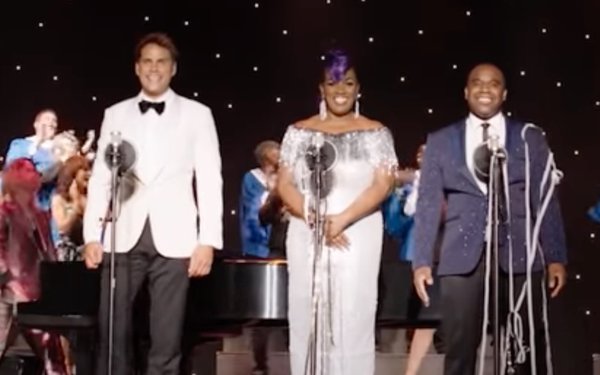 While there's no part of the wedding economy that hasn't suffered in the last 15 months, none can make it sound as mournful as unemployed wedding singers. So for its latest "get back out there, single people" push, Match released a new wedding anthemas inspiration.

Created by actor Ryan Reynolds' Maximum Effort agency, "Get Back to Love" stars glittery, soulful and desperate singers, as well as some chocolate fountains and impressive dancing. The singers, who want to get back to work and not have to move back in with their parents, are happy to remind people that it's time. "You're double-vaxxed," they sing, "but still single A.F."

Match, which last month began working with the White House to encourage vaccination for its 11.1million subscribers, is promoting COVID-19 vaccinations on its U.S. brands, including Tinder, Match, OkCupid, Hinge, Plenty of Fish, BLK and Chispa.

The efforts include vaccination badges for singles to put on their profiles and free "Super Likes" and other boost-type features for U.S. users who say they are vaccinated. The campaigns are scheduled to run through July 4.

The company also recently released its first-quarter results in a note to shareholders called "The Light at the End of the Tunnel."

It says that revenue gained 23% year-over-year and that Tinder -- the most negatively impacted by the pandemic -- had gained 18%. Engagement on Tinder continues to be above pre-COVID levels in all age and gender cohorts. Match says two of Tinder’s busiest days, as measured by most Swipe activity, happened in the just-concluded quarter.

"With the onset of the new year, we saw a seasonal spike in first-time subscribers that the business has been able to maintain," its execs say. "We are seeing a new normalization level as vaccines continue to roll out globally, even as several countries are experiencing a third wave of cases. While we are not out of the woods, we are increasingly optimistic about our business momentum."

Separately, Match says it closed its previously announced acquisition of Hyperconnect, a leading social discovery and video technology company, for $1.73 billion. Besides expanding its reach in Asia, it intends to use real-time video, AI, and AR. avatar technology in its brands in all regions.