Ad Spending Surges 56% In May, All Media Except Magazines Rise 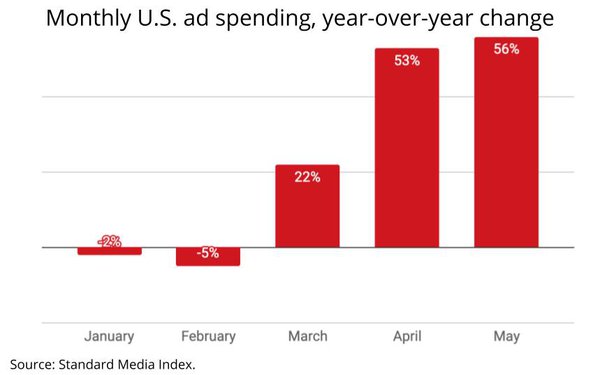 U.S. ad spending continued to rebound in May, according to a new, enriched database from Standard Media Index. The data, which is derived from SMI's expanded pool of actual media buys contributed by major agency holding companies, includes IPG Mediabrands, which announced in February that it was rejoining SMI's cooperative pool, and which beginning this month has been reincorporated.

The new data, meanwhile, shows the U.S. ad market surged 56% in May, following a 53% gain in April and a 22% increase in March, which was the first to show a year-over-year rebound from the pandemic-influenced advertising recession, which began a year earlier.

The data also reveals most media have benefitted from the rebound, with the exception of consumer magazines, which remained in decline in May, although another print medium, newspapers, have been on the rise since April.

The biggest resurgence, however, has been to media expected to benefit from the resumption of out-of-home behavior changes among U.S. consumers -- out-of-home advertising and radio (see data below) -- which is something an unrelated tracking study from GroupM's Mindshare also seems to support.

"This expansion delivers true census-level insights across all platforms and is immediately actionable for all players in the ecosystem," asserts SMI Global CEO James Fennessy. 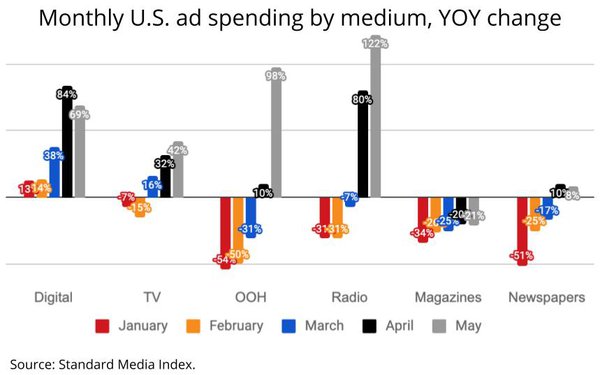