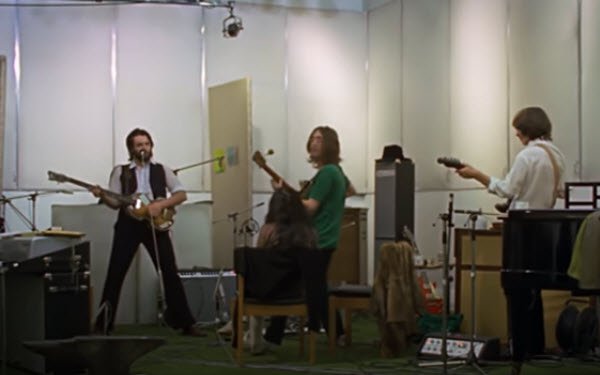 In what may be an indicator of lingering uncertainty about the extent of movie theaters’ attendance comeback as pandemic restrictions are lifted, the Walt Disney Company is shifting the debut of a much-anticipated Beatles documentary from a film that was to bow in theaters this August to a three-part, six-hour series to debut Nov. 25, 26 and 27 exclusively on Disney+.

“The Beatles: Get Back,” directed by “Lord of the Rings” director Peter Jackson, is culled from 60 hours of archived footage taped in January 1969 as The Beatles worked on what became the “Let It Be” album and feature-length film.

Viewers will see hours of previously unreleased footage and, for the first time, The Beatles’ entire farewell concert atop their London headquarters on Savile Row.

While the “Let It Be” documentary mostly portrayed the breakup aspect, and has been criticized as being negatively skewed (most recently by Ringo Starr), the new documentary reportedly shows many playful, positive interactions among the Fab Four.

Disney didn’t explicitly state why it was switching the project from theater-launched film (which, prior to the pandemic, was originally set for September 2020) to a series available at no extra charge to Disney+ subscribers.

While Bloomberg speculated that the decision might reflect some lingering uncertainty about the extent of movie theaters’ attendance comeback as pandemic restrictions are lifted, a statement from Jackson included in Disney’s announcement seems to imply that a feature-length film couldn't do full justice to the material, underscoring a series format’s ability to offer a more in-depth, intimate view.

“In many respects, Michael Lindsay-Hogg’s remarkable [original footage for “Let It Be”] captured multiple storylines,” said Jackson. “The story of friends and individuals. It is the story of human frailties and of a divine partnership. It is a detailed account of the creative process, with the crafting of iconic songs under pressure, set amid the social climate of early 1969. But it’s not nostalgia—it’s raw, honest and human. Over six hours, you’ll get to know The Beatles with an intimacy that you never thought possible.”

Other possible factors aside, the docuseries would seem guaranteed to draw a significant infusion of new subscribers for Disney+, as Americans gather around the TV during the Thanksgiving holiday.

The image above is a capture from Jackson's sneak-peek video on YouTube, released in December 2020.