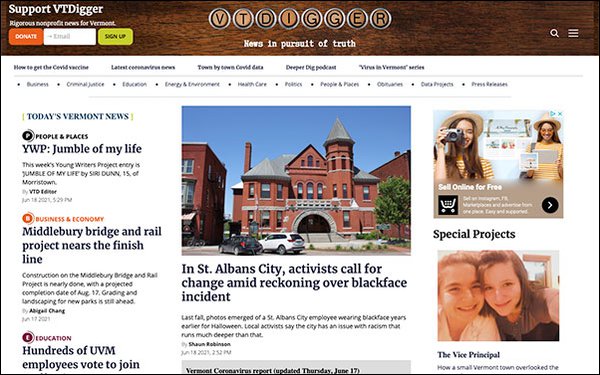 VTDigger is a local news site commended by The New York Times last year for building social trust that helped Vermont meet the challenges of COVID-19.

But it has to raise ad revenue to support its 21-person news staff, and that’s not easy, given that half of readership is out of state.

It can’t rely on direct-sold sales in those areas — especially since it has only one underwriting ad salesperson). So last year, its new CRO Jim Lehnhoff decided to dive into programmatic. And after his arrival in August, VTDigger implemented a program with Hashtags Labs to leverage unsold programmatic ad opportunities without getting the way of direct-sold sales,” says Stacey Peters, CTO of VTDigger.

This may not sound like a huge sum, but it’s critical revenue for a small nonprofit that reaches 700,000 people per month and is trying to sustain its award-winning investigative journalism.

“After ensuring that the CMS and other editorial-related tech is where it needs to be, we rarely have enough resources left to focus on the complex (and sometimes wonky!) world of advertising technology,” Peters states.

This saved the tech department time and money and “pleased the business team by increasing operational efficiencies and revenue right out of the gate.” Peters states.

Any challenges to overcome?

“One of big pain points was the capacity issue,” Peters says. “Finding someone established in sales is not necessarily the same person to handle the technical aspect — it’s like finding a car mechanic who can also whip up ice cream.”

Then there’s the “cat-and-mouse game” of keeping out inappropriate ads and those that reflect political bias. These can sometimes sneak in with programmatic. Hashtag Labs has kept them out.

Of course, VT Digger also relies on direct-sold local sales, grants and a secondary revenue stream based on reader services like obituaries and announcements.

VTDigger also reaches 30,000 people with its daily newsletter and 46,000 overall with its newsletter products.

Is Peters a native Vermonter? She’s originally from England and spent several years in New York laboring in tech jobs.  -“If you can’t point to your great-great grandfathers’ graves and know their feuds, you’re not a native Vermonter,” she laughs.