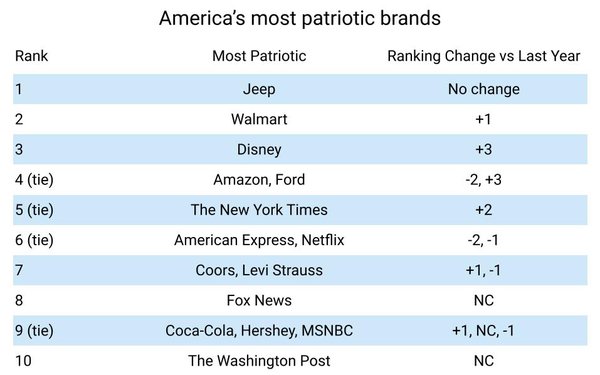 Media brands including Disney, The New York Times, Netflix, Fox News, MSNBC and The Washington Post, Twitter and CNN, are among America's "most patriotic," according to an annual study assessing more than a thousand iconic American brands conducted by Brand Keys.

Jeep ranked No. 1 this year, followed by Walmart, Disney, Amazon and Ford (tied for fourth place), and The New York Times.

The biggest gainer among the top 30 in the ranking (see below) over the past year was Home Depot, which moved up nine positions, while the biggest loser was Zoom, which fell 17 positions.

“Between the pandemic and politics, there’s no shortage of challenges facing brands,” stated Brand Keys President Robert Passikoff about this year's findings.

“Brands always have to compete in their categories but now they must battle in a pandemically limited marketplace and within shifting socio-political contexts, factors that have changed consumers’ lives dramatically along with their definitions ‘patriotism’ as it relates to brands," he added.

Passikoff noted that while several brands -- especially Zoom -- benefited from a "pandemic pop" last year, there was much less stimulus in this year's findings.

He also pointed out that the rankings are more than just flag-waving bragging rights, but have a material bottom line impact for many brands, because perceived patriotism helps establish "a lasting emotional connection" leading to as much as six times greater "engagement" with a brand, which can translate into increased profits.