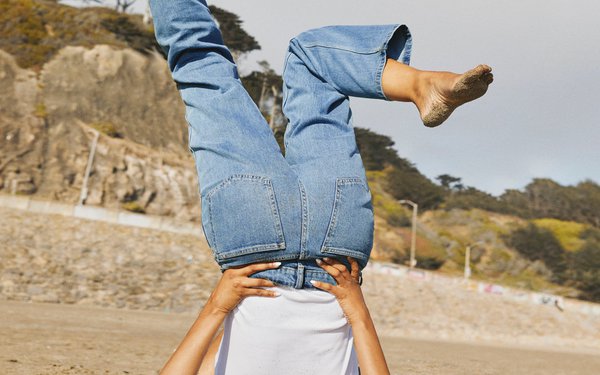 Aiming to take its sustainability claims to the next level, Everylane launching a “Clean Denim” collection that contains a groundbreaking stretch yarn. It’s also switching all its denim items to entirely organic cotton.

The moves may resonate with young shoppers, increasingly committed to less-damaging fabrics. But the launch also comes as the D2C company still struggles to rebuild its tattered image.

In the last year, it’s had to explain away a toxic work culture, racist policies, and accusations about phony environmental claims.

Denim continues to be one of the most environmentally damaging fabrics. Typically, it relies on cotton, problematic for the toxic pesticides used to grow it, and often contains elastane yarn, which contains harmful pollutants.

Everlane, founded in 2010, didn’t even offer denim until 2017. At that time, the San Francisco-based company said its move into the category stemmed from the ability to work with some of the world’s cleanest factories.

It claims Clean Denim is even better. Everlane is switching to Roica V550 yarn, which is the world’s first stretch yarn made without harmful chemicals. It is also using dyes that are free of microplastics, as well as recycled trim. All this, it says in an email to customers, “will allow Everlane to be one of the first companies to make denim that doesn’t dirty the planet.”

The company is still working to distance itself from scandals that broke last year, as employees and former employees worked to expose a culture that was toxic, racist and abusive.

At the time, Michael Preysman, founder and CEO, apologized for Everlane's treatment of its employees, and said the company was taking steps to introduce anti-racism training.

Everlane was also roundly criticized for firing employees as they tried to unionize at the height of the pandemic. Sen. Bernie Sanders, defending those employees, called Everlane’s behavior “morally unacceptable.”

The report said Everlane was “unable to provide information about factory conditions, has no energy reduction policy, or essentially anything that confirms it’s the sustainable company it’s always said it was.” The report continued: “As far as we can tell, Everlane is just another brand utilizing greenwashing tactics for sales.”

It also named Everlane (along with Allbirds, another D2C darling) one of the fashion industry's Top Three Greenwashers.

In a recent interview with The Business of Fashion, Preysman said he believes the company can still win with its “radical transparency” positioning.

Earlier this year, it hired Sophie Bambuck as its first-ever chief marketing officer. She had been global vice president of brand marketing for Nike Sportswear.