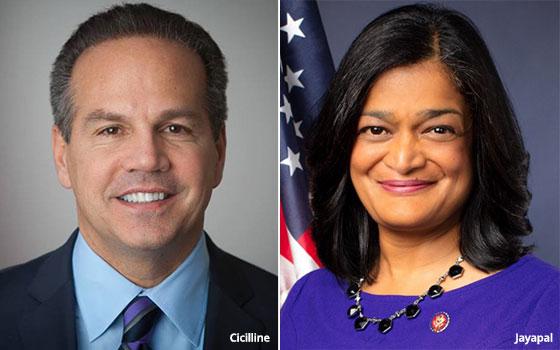 Two antitrust bills unveiled earlier this month would degrade popular services offered by Apple, Amazon and other tech companies, a coalition of 13 organizations says in a letter to lawmakers on the House Judiciary Committee

“At a time when voters are looking to Congress to address the country’s most pressing challenges, it seems hard to believe that Congress is instead on the verge of banning Amazon Prime and Amazon Basics; banning the preinstallation of iMessage and FaceTime on iPhones; and banning Google from including Google Maps in its search results,” the organizations add.

The letter comes in advance of Wednesday's scheduled markup of the bills by the House Judiciary Committee.

Signatories include groups backed by or affiliated with the tech industry, such as the Chamber of Progress and NetChoice, as well as the advocacy organization Americans for Prosperity, founded by the conservative Koch brothers.

The two bills discussed in the letter are part of a package of five proposed antitrust laws introduced earlier this month by members of the House antitrust subcommittee.

Cicilline's American Choice and Innovation Online Act would prohibit some large platforms to give preferential treatment to business they own.

“This bill prohibits companies like Amazon from manipulating their marketplaces to promote their own products,” Cicilline, chairman of the House antitrust subcommittee, said on Twitter when he unveiled the legislation.

If passed in its current form, the measure could also prohibit Apple from pre-installing iPhone apps, among other consequences.

One practical result could be that Amazon wouldn't be able to sell its own branded products, like Amazon Basics, if they compete with products offered by third parties that sell through Amazon's marketplace, according to the Seattle Times.

While the organizations that wrote to lawmakers Monday say the two bills would diminish consumers' experiences, some advocacy groups have praised the bills.

Robert Weissman, president of Public Citizen, said earlier this month the proposals “would check Big Tech’s overwhelming power by breaking up the tech giants, prevent them from gobbling up competitors, and require them to play fairly with competitors.”

Sally Hubbard, director of enforcement strategy at the Open Markets Institute, added that the bills represent “a major step toward reining in Big Tech’s monopolistic practices and safeguarding our democracy and liberty.”