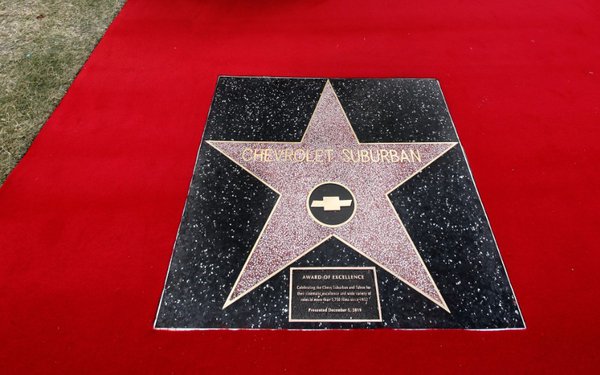 Chevrolet brought a piece of its movie fame to Arlington, Texas where its Suburban sport utility vehicle is assembled.

The Chevrolet Suburban became the first vehicle to earn an Award of Excellence star from the Hollywood Chamber of Commerce for its iconic role in film and television in 2019. It remains the only vehicle to be recognized by the chamber, per the Wikipedia list of all recipients.

That star resides in front of a shopping center and entertainment complex at Hollywood Boulevard and Highland Avenue in the Hollywood district in Los Angeles.

June 21 is proclaimed Suburban Day “to recognize the Suburban’s continuing legacy in Texas, Hollywood and around the world,” Williams said.

Chevrolet chose the location to celebrate the Suburban’s footprint in the city and its enduring popularity with Texas customers. Weber Shandwick, one of the brand’s agencies, created a video to celebrate the event.

The Award of Excellence star recognizes the Suburban’s robust acting career, appearing in more than 1,750 film and TV series.  The Suburban’s career in Hollywood began in 1952, when it first appeared on the silver screen in the movie “Big Jim McLain” starring John Wayne.

Hollywood Walk of Fame stars are awarded in categories including television, recording, motion pictures and live performance. The Suburban received one of a handful of stars in the “special” category. Other recipients in that category include the Los Angeles Dodges, Victoria’s Secret Angels and the Los Angeles Times.