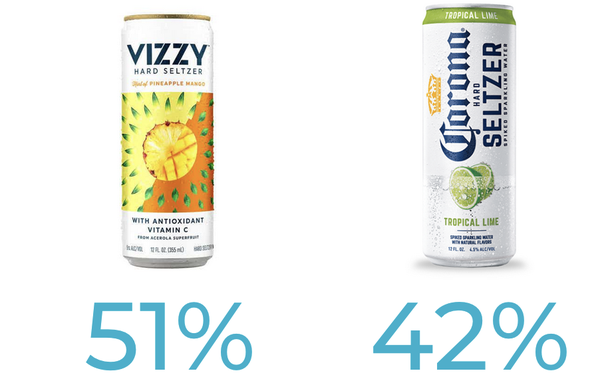 Above: Two of the most-popular hard seltzer brands among Gen-Zers and millennials.

Want to reach younger legal-age drinkers with a hard seltzer or ready-to-drink (RTD) cocktail? Try striking a balance between wellness and indulgence.

“Drinks that cater to a healthy lifestyle without sacrificing alcohol content are likely to be well-received,” concluded Reach3 Insights, based on recent research into the alcoholic beverage drinking plans of Gen Z and millennial consumers as they head into this first post-pandemic summer.

“There’s a desire among this cohort for functional types of ingredients,” Reach 3 Insights CEO Matt Kleinschmit told Marketing Daily. As an example, he pointed to Vizzy Hard Seltzer, which trended hot among respondents. That brand’s label boldly states “With AntiOxidant Vitamin C.”

Other functional aspects appealing to younger drinkers are portability and low-alcohol content, Kleinschmit said, but “no-alcohol” is a no-no.

As younger drinkers head back outdoors -- and indoors -- this summer with what Kleinschmit termed a “pent-up demand for interpersonal social gatherings and getting out with friends,” 90% of respondents said they will drink the same or more as compared with last year.

And hard seltzers and RTD cocktails should be a big part of that.

“Hard seltzers continue to be a mainstay of this cohort, with RTD cocktails waiting in the wings,” Kleinschmit said.

Indeed, 37% of respondents said the hard seltzer category as a whole is here to stay, with 79% expecting the so-called craze to “last” at least until next year.

Meanwhile, 77% expect RTD cocktails to be “hot” this summer (compared with 71% for hard seltzer) -- good news for brands in the category, being that 51% of respondents also expect to order alcohol for delivery.

Both the convenience of RTD cocktails and the willingness to get drinks delivered represent holdover behaviors from the pandemic that may now be here to stay. Ecommerce has taken off, and looks like it will continue,” stated Kleinschmit.

Among the questions alcohol marketers now face, he said, are whether or not hard seltzer drinkers will transition over to RTD cocktails – and what exactly will appeal to consumers in both categories.

Vizzy, for example, is a MolsonCoors brand, but not marketed as an offshoot of an existing beer brand. Michelob Ultra, on the other hand, received a very low hotness score, which Kleinschmit said was caused by both lack of awareness and “confusion about whether it’s a beer or a hard seltzer.”

Pointing out that the rapid rise of hard seltzers took the alcoholic beverage industry by surprise, despite all the market research that’s done by industry players, he added that it’s imperative for them to understand “what’s the next thing that will be hot.”

In that regard, here are some of the RTD brands now termed hot by Gen Z and millennials: Loyal hard lemonade, Jack Daniels blended with cola, Crown Royal Whisky & Cola, and On The Rocks Effen Vodka. One of the lower scores went to Fugu Vodka Bloody Mary, apparently because it lacks sweetness.

As one respondent told Reach 3, his peers want “hard seltzers with fruit, mixed drinks again with fruits …anything kind of sweet, very refreshing."

Both hard seltzers and RTD cocktails lend themselves to summer outdoor activities, of course. In fact, Just 58% of respondents were “very excited” to get back to indoor drinking (although the figure rises to 66% in urban areas).

Reach3’s research was conducted via mobile messaging conversations -- including the opportunity for them to include their thoughts on video -- conversations with 300 Gen z and millennial drinkers from May 6-10.