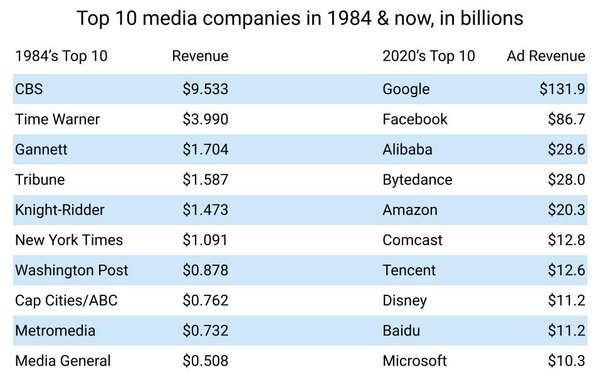 Today's TV Watch was inspired by two stories I covered this week: A report from GroupM calculating the world's biggest media companies, and Google's Timelapse app, which won an award at this week's Cannes Lions festival. I decided to mash them up to see what the equivalent 37-year time lapse has had on the media industry in general, and the TV industry in particular.

I don't have the tech chops to program a real-time visualization the way Google has for planet Earth, so I'm showing the old fashioned way: a data table.

Aside from the obvious economic disparity -- 2020's fourth-ranked company, TikTok owner Bytedance, is bigger than all of 1984's top 10 combined -- the most striking initial observation is that all 1984 companies were in the TV business. Even big newspaper publishers, which owned large groups of broadcast TV stations.

In 2020, only two of the top 10 -- Comcast and Disney -- are appreciably in the TV business, unless you count YouTube owner Google and Prime owner Amazon. I mean, YouTube does operate YouTube TV, which is a vMVPD service. But you get the point.

The other striking detail is that several of the 1984 companies no longer exist, while all but three in 2020 do. Comcast, Disney and Microsoft -- didn't exist in 1984. Interestingly, one of those defunct companies, Media General, gave birth to what today is the largest independent media buying service: Horizon Media. While another, Metromedia, was the foundation for Fox Corp. And if you want to be really technical, there's still some jostling going on vis-à-vis  Time Warner (Discovery) and Capital Cities/ABC is now part of Disney.

Another interesting tidbit is that 1984's newspaper-based companies have mostly gotten out of the TV business and are essentially pure-play publishers.

If you really want to squint at 2020's toppers, you could argue that many represent the "new TV," including Google (YouTube), Facebook, Alibaba, Bytedance, Tencent, Baidu and Microsoft, while old-schoolers Comcast and Disney are still on  the list.

To be honest, I'm not 100% sure what the actual insight is here, except that the TV industry has — and will continue — to evolve.

When I coincidentally started covering it in 1984, the big trend was something called "cable TV," which classic broadcasters like CBS sought to label as something other than TV. Early attempts to distribute it over digital networks -- videotext, audiotext, etc. -- largely failed, but ultimately paved the way for the internet-based streaming and over-the-top TV distribution.

Qhether you're watching it via Microsoft's Xbox, or Google's YouTube TV, it's still TV. Unless it's HBO, of course.

The last thought I'll throw in here is a nod to my old friend Mitch Oscar, who like me, has been frustrated that the industry hasn't come up with better names for what to call this stuff. Mitch coined the term "televisual," which I thought was pretty good. More recently, GroupM's Brian Wieser suggested we call it all "CTV+."

Or maybe we should avoid relabeling it altogether, because chances are that 37 years from now, we're going to want to call it something else.

commentary, trends, tv
3 comments about "It's Not TV, It's TKO".
Check to receive email when comments are posted.
Read more comments >
Next story loading