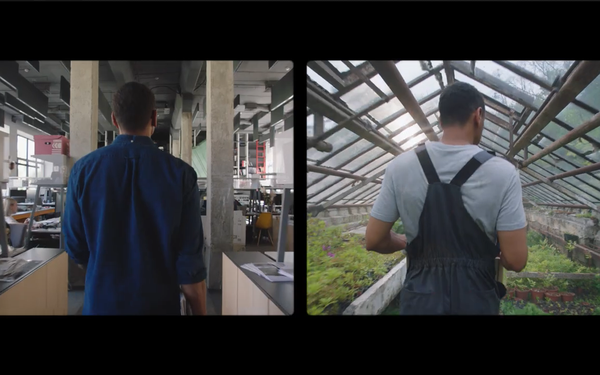 The Wall Street Journal this month is expanding its “Trust Your Decisions” campaign with out-of-home activations that mark another return to pre-pandemic strategies of raising awareness and driving subscription growth.

The effort comes as New York lifts pandemic restrictions and more businesses bring workers back to office buildings that stood mostly empty for the past year.

On June 28-29, the WSJ will set up stands in New York’s Bryant Park, down the street from the paper’s Midtown office, to give away coffee. It will reinforce the “Decisions” message by installing “thought bubbles” showing questions that its reporting can answer.
The newspaper’s outdoor campaign also includes 662 buys to blanket New York City’s mass-transit system and travel hubs, such as John F. Kennedy International Airport, according to a spokesperson.
The experiential and outdoor campaigns are notable as more advertisers aim to reach consumers  emerging from their isolated existence of working from home and meeting in person. Spending on out-of-home campaigns last month doubled from a year earlier, according to data cited byMediaDailyNews.
New York’s Mass Transit Authority reports that subway, bus and rail ridership is still much less than it was a year ago, though car traffic for bridges and tunnels is almost back to normal. As more people return to the office, those volumes will grow and give outdoor advertisers greater visibility.

Of course, this month’s outdoor and experiential activations don’t mean the WSJ is abandoning digital media altogether. The centerpiece of the latest phase of the campaign is a short film titled “Decisions, Decisions”  that will run on YouTube, Hulu and social media.

The film consists of vignettes that dramatize how people make decisions based on what they read in the paper. That theme runs through a 30-second commercial, eight 15-second spots and two six-second bumper ads.
The paper is integrating those digital spots with its outdoor campaign. Its signage has QR codes for viewers to scan with their smartphones. They can read stories that answer questions posed in the 15-second spots. The goal is to highlight how the WSJ’s reporting helps people to make decisions and drive readership.
The WSJ’s outdoor and experiential campaigns are another welcome indicator the pandemic is fading in the U.S., setting the stage for a broader-based recovery.
ad campaign, newspapers
Next story loading