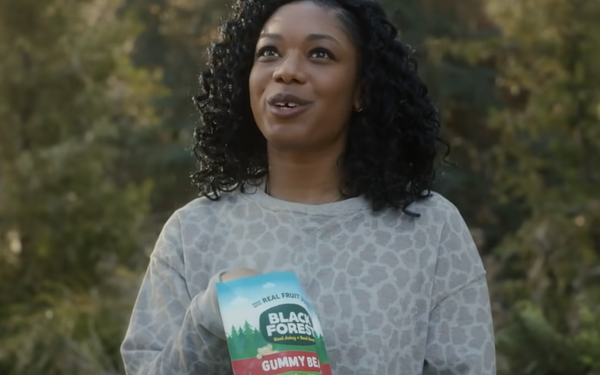 Black Forest organic gummies and snacks is doubling down on its commitment to protect and restore forests while tweaking its tagline and leveraging the tranquility of wooded areas in a new campaign.

Central to the brand’s new positioning is an emphasis on good ingredients and doing good things for the environment.

Campaign creative from the Duncan Channon agency titled “Take Me To The Forest” offers a respite from the noise and chaos of a child practicing the accordion and a partner who is immersed in virtual reality martial arts games.

“When we looked at the gummies and fruit snack categories, we realized there’s kind of a sea of sameness,” Kate Adams, senior marketing director, Black Forest and Fruit Snacks Portfolio at Ferrara Candy Co., tells Marketing Daily. “So Black Forest had the opportunity to stand for something different and something real.”

The creative depicts a portal “to a place where things are more simple, they’re more natural, they’re most tranquil and most importantly, they’re more real,” Adams adds.

The “sweet spot” for the campaign is millennial parents.

Six-second ads on digital and social-media platforms echo the “Take Me To The Forest” messaging while depicting moments of frustration: a dog destroying a couch, an overflowing laundry pile, and the third parking ticket in a week.

Last month, Black Forest announced the third year of its partnership with the National Forest Foundation in support of efforts to replant forests across America.

Black Forest enlisted singer Kelly Rowland to help spread the word about the forest-renewal initiative, including with Instagram posts.