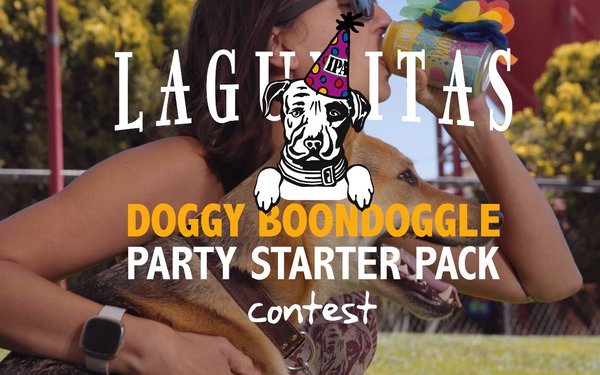 The dog days of summer may have a different meaning this year for 100 winners of The Lagunitas Brewing Company’s “Doggie Boondoggle Party Starter Pack” contest kicking off today.

“After this year, your dog deserves a party, and you can probably use an ice-cold brewski,” says a man at the start of a video now running on the Heineken-owned IPA brand’s digital and social channels. “Coming out of this crazy year, we wanted to help give thanks to those pups who kept us sane,” adds a woman.

Yet the video concludes on a perhaps controversial note, as the opening dog lover comes back to say, “I feel sorry for all those people who had cats.”

We’ll excuse Lagunitas for that dig, though, since the brand has been inextricably linked to dogs since its launch in 1993 -- most visibly in a dog of unknown origin who adorns every bottle or can, either on the label or bottle cap.

“Lagunitas and dogs go together like Lagunitas and hops,” the brand’s chief marketing officer Paige Guzman told Marketing Daily. “We live and breathe ‘em…. Even our brewery’s fermenters are named after four-legged family members that’ve gone to the great dog park in the sky.”

So who better to throw a Doggie Boondoggle?

The Party Starter Pack contest, administered by Marden Kane, is targeted at “anyone over 21 who loves dogs and IPAs,” Guzman explained. “We also figure folks across the country could use a party and a beer right about now.”

Consumers can enter the contest by posting an image or video on Instagram or Twitter, complete with the hashtag #LagunitasDogContest and an explanation on “why your dog deserves a party.”

For example, according to one participant in the Lagunitas video, “She had a lot of her opinions on conference calls by barking, probably really helpful for everybody.”

The Starter Pack going to each winner will consist of a $300 Visa gift card, plus $50 worth of “schwag for both dogs and their humans,” Guzman said. The schwag will include branded Mason jars, “accessories for your own Boondoggle’ photo booth, and more.”

The contest runs until July 23,with winners to be announced August 23. Lagunitas says the Boondoggles will take place that same week in celebration of International Dog Day (August 26), although the rules don’t stipulate that.

Also on Aug. 26, Lagunitas will donate $20,000 to Best Friends Animal Society, which helps dogs get adopted. The brand has been donating to dog-focused nonprofits for nearly a quarter-century. Guzman said.