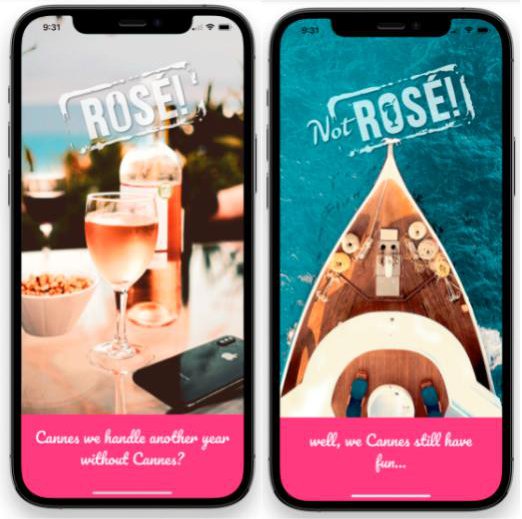 In a virtual Cannes promotion that comes across as a little tone deaf given all the inspirational, culturally transformative discussion taking place at this year's Lions festival, deep-learning marketing applications developer Cognitiv once again is running its “Rosé / Not Rosé" app promotion for virtual attendees during this week's online events.

"For the second year in a row, marketers will have to forego the yachts, parties, picturesque networking and serendipitous meetings of Cannes, but that does not mean they also have to go without celebrating the Croisette’s favorite drink," reads Cognitiv's press release, which also includes a link to a promotional video featuring actor Chris Diamantopoulos, who portrayed the character Russ Hanneman on HBO's "Silicon Valley," which not-so-coincidentally is known for its catchphrase "Hot Dog / Not Hot Dog" line (see below).

While the Cannes Lions have traditionally been about having a lot of fun, jurors, speakers and winners this year have pretty much made the case that the past 18 months have led to some self-reflection and a push to be more culturally sensitive and to do and recognize great marketing that doesn't just entertain people, but lifts them up in some way.

So why a powerful marketing technology company would choose to use its resources to develop an app that enables users to take a selfie -- with or without a drink -- and have the app tell them the image contains Rosé or not, is probably a conversation better left for next year's festival, while standing outside the Gutter Bar.

But if you genuinely are in that kind of spirit, you can download Android or iOS versions of the app here.