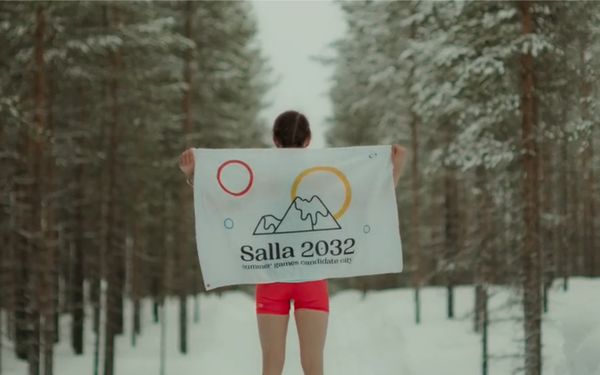 Love, in-game concerts and an Olympic bid turned climate change call to action were among the Lions Grand Prix winners at the Cannes ad festival Wednesday.

The Entertainment for Sport Grand Prix went to House of Lapland and Africa DDB Sao Paulo for “Salla 2032.” A cold, remote city in Finland made a proper bid to serve as host of the 2032 Summer Olympics. Complete with logo and mascot, the bid’s true purpose was revealed as a plea to take climate change seriously and Save Salla -- or the frigid city will actually be a viable summer Olympic candidate by 2032.

“Feed Parade,'' created by Gut Sao Paulo for Mercado Livre, won the Grand Prix Entertainment for Music.  When the world’s largest Pride parade in Brazil went virtual in 2020, it didn’t stop attendees from across the globe. Every part of the parade route was photographed and turned into an Instagram feed where one comment would tag a person as present on the parade route, which was filled to capacity in 15 minutes.

Sinyi Realty and Dentsu McGarryBowen won the Grand Prix Entertainment for "In Love We Trust.”  The film followed a young woman working in Taiwan's home registration office. She saw marriages, divorces, deaths, and questioned whether she wanted to be married. To sell a home, Sinyi Realty sold hope to young people pursuing happiness.

Dove and its agency, Ogilvy London, won the Industry Craft Grand Prix for “Patrick,” which features a frontline worker at the conclusion of a workday during the height of the pandemic. His face is marked and bruised from wearing PPE for hours on end.

The Digital Craft Grand Prix was awarded to Epic Games for its in-game collaboration with Travis Scott. His “Astronomical” music tour was held inside Epic Games’ Fornite mere weeks into the 2020 pandemic.