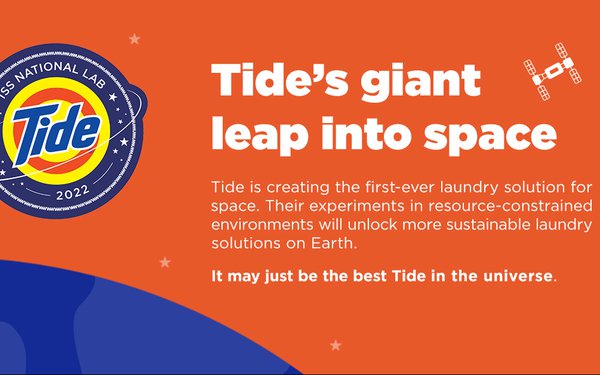 When you’re the top-selling laundry detergent on the globe, what’s left to conquer? For Procter & Gamble’s Tide, the answer may lie beyond -- in outer space, the moon and Mars.

Mission PGTide, launching next year, will first travel to the International Space Station (ISS) to “test the stability of cleaning ingredients under microgravity conditions and exposure to the radiation levels experienced in space,” according to P&G.

And, 75 years after P&G’s introduction of Tide as the first heavy-duty detergent for the then-new technology of automatic washing machines in 1946, Tide is now an acronym for P&G’s sci-fi sounding “Telescience Investigation of Detergent Experiments.”

Up in the space station, Mission PGTide will also test stain removal ingredients and performance through experiments involving Tide To Go Wipes and Tide To Go Pens.

All this is part of a just-announced Tide agreement with NASA to explore how to clean astronauts’ clothing.

Revealing the dirty laundry of space exploration, P&G explained that astronauts currently wear articles of clothing several times before they’re replaced -- rather than being washed. Thus, 160 pounds of clothing per astronaut each year need to be shipped to the space station, the company said.

In the future, P&G added, limited cargo capacity will pose even greater challenges for deep space missions, such as Artemis Moon voyages and Mars endeavors, which could take two to three years from start to finish.

Tide’s pre-launch preparations for its journey into space are already underway, as P&G said the brand has already developed “a fully degradable detergent, specifically designed for use in space to solve malodor, cleanliness and stain removal problems for washable items used during deep space missions, while being suitable for use in a close-loop water system.”

Tide and NASA researcher,s P&G said, may also study how this new detergent can be used in a combined washing and drying unit for “planetary habitats” and “low-gravity surface conditions.”

Major challenges for what P&G termed “off-earth laundering” include ingredient safety and compatibility with NASA life support systems, a limited amount of water available per wash load, and a requirement that the wash water be purified back into drinking-quality water.

“Through private-sector utilization of the space station, companies like P&G can conduct investigations in ways not possible on earth to develop new consumer products, enhance existing products, and better understand processes that further business models both on the ground and in low Earth orbit,”.said Dr. Michael Roberts, acting chief scientist for the ISS National Lab.

Indeed, said Aga Orlik, senior vice president, P&G North America Fabric Care, “We are eager to apply our learnings from our partnerships with NASA and the ISS National Lab to Tide on Earth, developing a low-resource-use laundry solution for everyday use while meeting consumer demand for more sustainable products.”

P&G tied its space efforts to the company’s recently announced Ambition 2030 initiative “to reduce the environmental impact of a load of laundry while increasing the impact of clean clothes.”

“Humanity has reached a pivotal point where on one hand, we’re on the exciting cusp of space colonization, and on the other, facing a critical period where action must be taken now to save the planet we all call home,” said Orlik. “The collaboration with NASA and the ISS National Lab..allows us to push the bounds of resource efficiency to its absolute limit, uncovering learnings with practical applications for both the future of laundry in space and here on earth.”