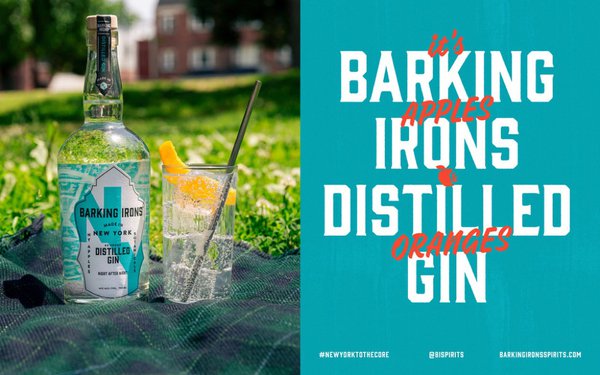 While the Applejacks boast of being “filled with only the finest New York apples,” the Gin blends that apple base with neutral spirits and a botanical blend containing, we assume, non-New York orange peels. The products are crafted by Brooklyn’s Van Brunt Stillhouse.

The posters are being wheat-pasted around New York City by Night After Night, as well as being distributed to Barking Irons’ retail community of liquor stores, bars and restaurants. Both brands are now sold in New York and Florida, including Epcot Center and Miami locations.

The paid social media is primarily through Instagram carousels that drive users to ecommerce partners. Launched this week, the campaign will run all summer.

The posters are ongoing.

Barking Spirits’ target audience is “generally, 21+ cocktail enthusiasts,” Night After Night director of PR and marketing Ashley Purdum told Marketing Daily, adding, “We like to say we target 'high-minded low lifes’ -- those who appreciate nice spirits but can have just as much fun in a dive bar as a fancy rooftop.”

Another aspect of Barking Spirits marketing is the cocktail recipes promoted to its customers. Last year, for instance, there was a Lower East Cider recipe for the Applejack (basically, take New York State apple cider, combine with spices of your choice, heat the mixture, spike it with Applejack).

But, if you’re looking for a drink to celebrate the upcoming Fourth of July holiday, we’d recommend going with the Applejack, since that’s likely what the Founding Fathers were drinking.