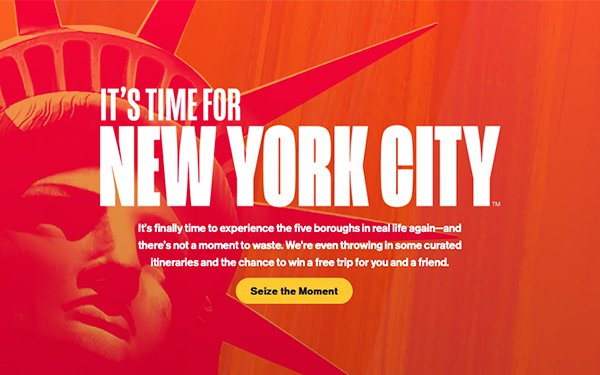 With the worst of the pandemic behind it, New York City has launched an unprecedented $30 million global campaign to attract tourists back to the city now that it has officially reopened.

NYC & Company, the city’s official destination marketing organization, is orchestrating the campaign which is being financed in part by funds secured through the American Rescue Plan Act.

The campaign, called “It’s Time for New York City” will run in three phases and will include television, digital, outdoor media and partnerships. The initiative reminds visitors of NYC’s unrivaled energy, excitement, and multitude of experiences.

The campaign will first target travelers in 23 markets across the United States, followed by Mexico, Canada and Latin America, with plans to expand internationally as other key markets reopen.

The multi-phased campaign will launch with a cooperative marketing and advertising partnership with AAA Northeast to boost regional travel this summer. The collaboration includes guides to each of the five boroughs and special offers and NYC packages for 8 million AAA members in the northeast region.

A television and video spot will launch nationally in early July, asking American travelers to consider, “Where Were You in the Summer of ’21?” reminding them that they do not want to miss being a part of New York City’s comeback.