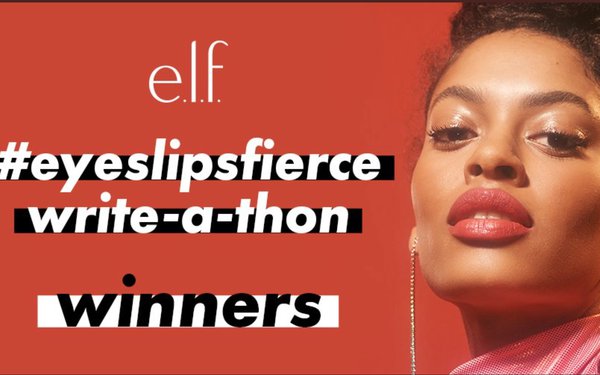 Can a lipstick paint a thousand words? If so, E.L.F. Cosmetics is cornering the story market and says its recent #EyesLipsFierce Write-a-Thon drew 10,000 contest entries.

It claims it’s the first beauty brand to use Wattpad, the social storytelling platform, and that it notched the second-highest number of U.S. entries in Wattpad’s history. (Wattpad says a T-Mobile contest generated almost 15,000., making it the largest U.S. effort.) It’s also worked with brands like Netflix, Coca-Cola and Ben & Jerry’s.)

Besides giving the five authors welcome literary exposure, E.L.F. also did a good deed, with every entry using the #EyesLipsFierce hashtag generating a $1 donation to Girls Inc., a nonprofit committed to empowering young women.

The company says the challenge earned 31 million impressions on Wattpad’s homepage, which is 423% higher than E.L.F.’s initial estimate of 6 million.

Wattpad’s editorial team chose the five winners, who wrote about women they admire, and on topics that include mental illness and motherhood. It’s featuring them on its social channels all week, commemorating National Writing Day June 24.

This is the latest in the brand’s ongoing efforts to use unexpected tech to stay relevant with its Gen Z audience. Last month, it introduced its Twitch channel with a “Game Up” contest. That one focuses on the intersection of cosmetics and gaming, encouraging users to post their favorite “Game Up” looks when they are streaming.

And last year, it ran an “Eyes. Lips. Famous.” Contest on TikTok.

The brand, which is vegan and cruelty-free, is a favorite of U.S. teens. Piper Sandler’s more recent “Taking Stock of Teens” survey ties E.L.F. with Tarte (owned by Kose Corp.) as the No. 1 favorite cosmetic brand.

The company says it continues to gain market share in its most recent quarterly results, with net sales climbing 24% to $92.7 million. That marks the Oakland, California-based company’s ninth straight quarter of positive growth.