Who's Got The Body Wash? Patti Labelle Steps Into Old Spice Family Drama 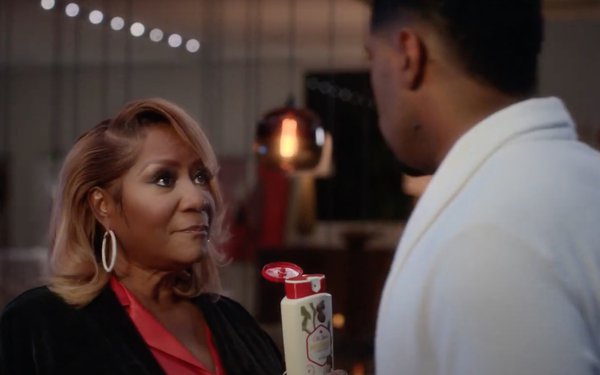 Old Spice is heating up the family drama surrounding its skincare products, inviting powerhouse Patti Labelle to poach a little men’s body wash for herself.

In the latest spin on the “Men have skin too” campaign, introduced back in 2019, the Procter & Gamble brand builds on the insight that men are becoming more concerned about their skin all the time, especially benefits like moisturizing and exfoliating. “We know that 72% of our audience say they care more,” says Matt Krehbiel, vice president of Old Spice. “And 49% of women admit they occasionally use their guy’s grooming products.”

Labelle joins as the mother-in-law. Guy Deon Cole ("Black-ish," "Grown-ish") and actress Gabrielle Dennis ("Black Lady Sketch Show," "The Upshaws") are reprising their husband/wife roles.  The singer brings her trademark brassiness to the drama of cohabitation that was all-too-familiar during COVID-19.

“So many people had family members move in and stay,” Krehbiel tells Marketing Daily, “and we thought it would be fun to have him walking the line of wanting to be welcoming to his mother-in-law but still defending his turf in the shower.”

The spot, created by Wieden + Kennedy, is for its “Fresher” collection, which Krehbiel says is proof that men’s attitude about fragrance is far more flexible than it used to be. According to the company, men are more focused on the core components of a scent and interested in smells that offer a little bit of travel break -- like an island breeze.

“We still give some fun Old Spice twist to the names,” he says, “like Volcano with charcoal, or Wilderness with lavender. But the ingredients offer reassurance that it smells fresh. And he has an idea of what it will smell like before he even pops the cap.”

Krehbiel says a wide variety of scents is a vital part of its strategy, enabling young men to experiment until they find a signature fragrance.

Ads are running on TV, including NBA playoff games. “But we’re also doing much more digital,” he says. “People like to share these ads -- either men because they want people to know they’re not the only ones whose girlfriends use up their body wash, or women who like to know they’re not the only ones who share. So running them on a variety of digital platforms just makes it easier for them to pass these on.”