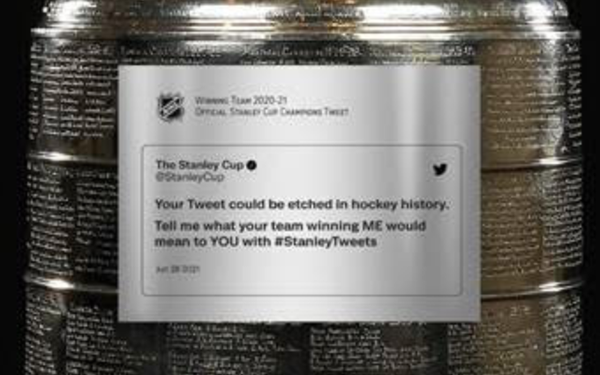 The National Hockey Association is enlisting Twitter and Clubhouse to engage fans during the Stanley Cup games.

For the first time, fans will be able to take part in Stanley Cup Final Media Day via Clubhouse for conversations with the participating teams. This marks the first time that a major sports league and Clubhouse have collaborated on a championship, says NHL Chief Marketing Officer Heidi Browning, adding that the league plans to leverage Clubhouse's platform year-round.

Meanwhile, the NHL and Twitter are partnering to get fans involved with the Stanley Cup.

The Stanley Cup, one of the oldest and most recognizable trophies in sports, is the only major sports trophy with its own Twitter handle, @StanleyCup, according to the NHL. Starting today, @StanleyCup will invite fans to tweet directly to the #StanleyTweets hashtag for a chance to have their tweet memorialized.

The Twitter call to action is “Tell us what winning a Stanley Cup Championship would mean to you."

“The thought was really finding a way to give fans recognition for their commitment the same way that we would with the players themselves," Browning tells Marketing Daily.

Stanley Cup Final game broadcasts on NBC and Rogers will feature in-game calls to action and national TV spots encouraging fans to participate through a new use of Twitter QR codes, enabling fans to scan the TV spot with their phone and automatically open Twitter to compose their #StanleyTweets. Spots will also run on NHL Network.

Hockey fans are amongst the most passionate sports enthusiasts on Twitter, says Will Exline, senior manager, sports partnerships, Twitter."

"Because Twitter is real time and where you’ll find those instant fan reactions, you really notice the passion of hockey fans who use our service during the Stanley Cup Playoffs and throughout the year," Exline tells Marketing Daily.