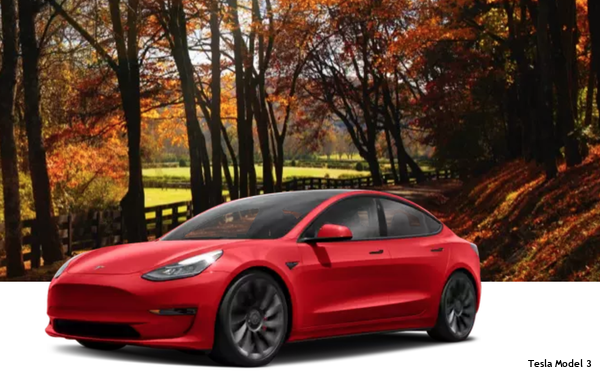 In what surely is a blow to the Detroit automakers, Tesla’s Model 3 has snagged the top spot on Cars.com's 2021 American-Made Index.

This is the first time Tesla has earned the number-one spot -- the first all-electric vehicle to top the list in its 16-year history.

The so-called Detroit Three (Ford, General Motors and Stellantis), Honda and Toyota also were tops in the 2021 index, with General Motors claiming the most spots.

The independent, annual list ranks the new vehicles that contribute most to the U.S. economy based on criteria ranging from U.S. factory jobs and manufacturing plants to parts sourcing.

Tesla has now cemented itself firmly on Cars.com’s American Made-Index, with the Model 3 and the Model Y taking the No. 1 and No. 3 spots, respectively, says Kelsey Mays, assistant managing editor and AMI’s lead researcher, Cars.com.

Americans actually do care where their cars are made.

According to new research from Cars.com, 72% of shoppers consider a car's U.S. economic impact a significant or deciding factor in their vehicle purchase, up from 70% who indicated the same in 2020. The company conducted the research May 14-17 and results are based on 1,012 responses.

Even as the pandemic threat wanes, a third of respondents in 2021 still say COVID-19 has made them more likely to buy an American-built vehicle. Up from just a quarter of respondents in 2020, 29% this year say that it's "unpatriotic" to purchase a non-American-made vehicle.

Perhaps it’s a missed opportunity for automakers to play up their U.S. assembly operations more than they already do.