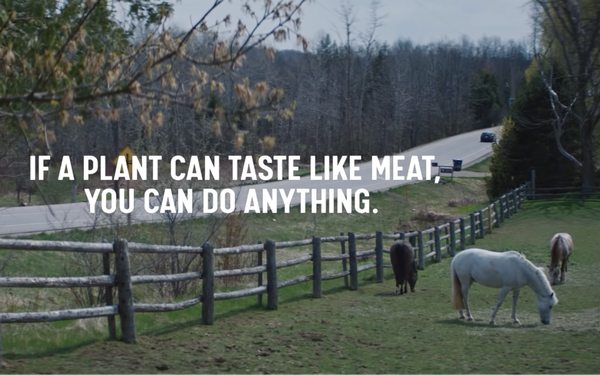 The first ad campaign from Alpha Foods seeks to alter perceptions about who eats plant-based foods and thus lower a major barrier of entry to the category.

“If A Plant Can Be Meat,” from the Mischief @ No Fixed Address agency, is a humorous approach to encouraging trial use of plant-based products.

It’s based on the notion that if a plant can be “meat,” people can do things they didn’t think they could.

In one example, a couple drives past a horse paddock as the voiceover intones “If Alpha plant-based meat can taste just like meat, then you can do anything”—including curbing the instinct to say “horses.”

Likewise, a shy woman sitting on a park bench next to a baby stroller can feel free to “say hi”  to a former high school classmate.

And a father with his two sons in a grocery store can “make it less obvious which child is your favorite” by hugging both of them and, inadvertently, a female store employee.

While the taste and price of plant-based meat alternatives remains a hurdle for getting people to try them, there’s also the perception of who the product and category is for, according to Alpha CMO Kierstin De West.

“People not seeing themselves in the category has been a huge barrier to them stepping into it,” De West tells Marketing Daily.  “So that’s something that we really wanted to challenge.”

“They don’t want to have to eat vegan or plant-based foods 24/7—maybe a couple of times a week,” De West adds.

The campaign humor extends to the Alpha Foods website, where people are greeted by the message “We’re setting out to prove that high-quality meat doesn’t have to come from animals pumped with more hormones than a grounded preteen.”