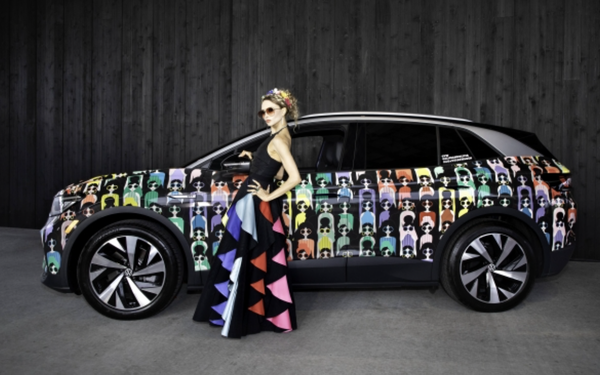 Volkswagen of America continues to focus on its ID.4 all-electric SUV with a trio of activations.

The efforts build on the main campaign, which launched in March.

The automaker and alice + olivia by Stacey Bendet recently collaborated to celebrate Pride month by hosting an inclusive prom-themed event at the Parrish Art Museum in Water Mill, New York

The ID.4 was on display wrapped in a custom alice + olivia print. The brands transported VIP guests to and from the event, allowing them to enjoy a firsthand experience of the new vehicle. VW's lifestyle agency Harrison & Shriftman handled the execution.

The event was held to benefit The Ali Forney Center of New York City, the nation’s largest agency dedicated to LGBTQIA+ homeless youth. Through their partnership, Volkswagen and alice + olivia made charitable donations to the organization, supporting its work in the LGBTQIA+ community.

The ID.4 "ushers in a new era of e-mobility" for Volkswagen, according to the automaker, which plans to bring at least one new all-electric model to market globally every year

The automaker also recently posted a TikTok video featuring the ID.4 and an original song that the company predicts could become an earworm. It was executed by @VW Social, the automaker's in-house social team.

VW also recently debuted a 16-minute “ID.4 Across America” long-form video chronicling VW’s e-Mobility team putting the all-new electric SUV's abilities to the test with a classic American road trip. The team covered over 7,000 miles in an attempt to show electric vehicle skeptics how easy it is to own and drive an EV. It was created by VW's in-house public relations team.