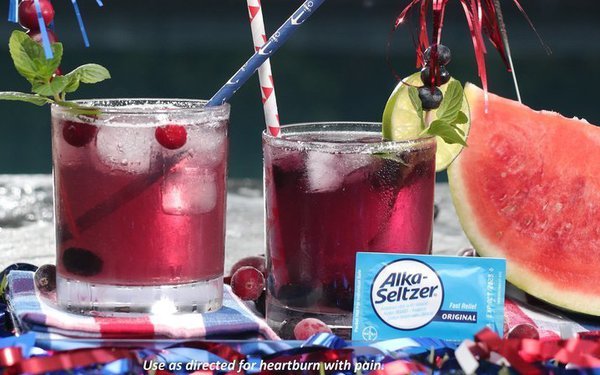 Perhaps because Jan. 1 is already a holiday, Bayer’s Alka-Seltzer has launched a petition at Change.org. to get the Fifth of July observed as National Recovery Mocktail Day.

A mocktail, if you don’t know, is a non-alcoholic cocktail, and Bayer has launched its own line of Alka-Seltzer Mocktails. No, the effervescent brand isn’t hopping onto the CPG flavored seltzer bandwagon, but rather pushing a bunch of recipes offered online, and touted by celebrity bartenders Ariana Madix and Tom Sandoval (from Bravo’s “Vanderpump Rules”) in a series of short videos developed by BBDO Worldwide.

The “Wake Up Call" mocktail, for example, calls for dissolving two Alka-Seltzer tablets in four ounces of water, adding four to five frozen blueberries and a half-teaspoon of acai juice, garnishing with a lime slice and mint leaves, and topping the concoction off with ice cubes.

"From beer to patriotic dishes and piles of BBQ goodness, celebrating the nation's birthday can often leave us feeling fireworks of a not-so-pleasant nature in our heads and stomachs the next day," explained Teresa Gonzalez Ruiz, vice president marketing, nutritionals and digestive health at Bayer Consumer Health.

So why just get relief of heartburn and headaches with Alka-Seltzer’s normal mix of antacid, aspirin and fizziness -- or even with the brand’s lemon/lime-flavored version -- when you can liven the brand up even more with extra flavors?

Zeroing in on a variety of heavy-indulgence occasions, the "Making Mocktails with Tom and Ariana" campaign, running on social media platforms of the brand and of the two stars, began with a day after St. Patrick’s Day video and now numbers five episodes, with a sixth scheduled to debut… you guessed it…on July 5.

Alka-Seltzer’s Mocktail site now includes 13 recipes, including our favorite, which we may try out in November: The Turkey Day Ready Mocktail, whose ingredients include a garnish of  two graham crackers and a mini cinnamon-sugar doughnut.