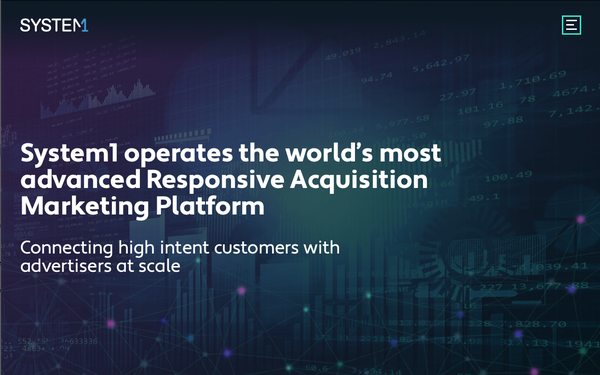 The company will be called System1 Group Inc., and will be listed on the NYSE under the ticker symbol “SST.”

SPACs are increasingly being set up for such purposes. BuzzFeed recently announced it would merge with a SPAC company named 890 Fifth Avenue Partners to prepare to go public.

A SPAC is a company that has no commercial operations, formed with the purpose of raising capital through an IPO in order to acquire an existing company.

The deal includes up to $600 million of committed financing, comprised of a debt commitment of up to $400 million and a $200 million equity backstop from Cannae Holdings, Inc., System1 says.

In addition, the company, which was founded in 2013, is taking over Protected.net, a developer of security and privacy subscription producst. This will enable it to further diversify its business model and build its privacy-focused products.

Blend adds: “The transaction will provide capital for accelerated investment in our RAMP technology and further our position as a leader in privacy-centric customer acquisition.”

Signal1 has a growing focus on consumer privacy and security,” Blend said in an interview published on the company website earlier this year.

“We started the company with the mission of eliminating disruptive or harmful advertising by matching people with the most relevant advertising from the best companies,” Blend added.

Startpage does not pass personal data such as a person’s IP address to System1 for email marketing. and only offers an Anonymous View of browsed web pages.

In general, though, consumers who convert to advertising and supply their email address can be targeted for email marketing campaigns, both triggered and promotional.

When properly used, email is sent only to customers who subscribe while providing a level of transparency and easy mechanisms for opting out. A new study by Alchemy Worx shows that the biggest brand turnoff is when emails are sent to people who had unsubscribed.
email, financing, omni-channel marketing
Next story loading