Used Car For Sale: Full Disclosure, It's A Toyota 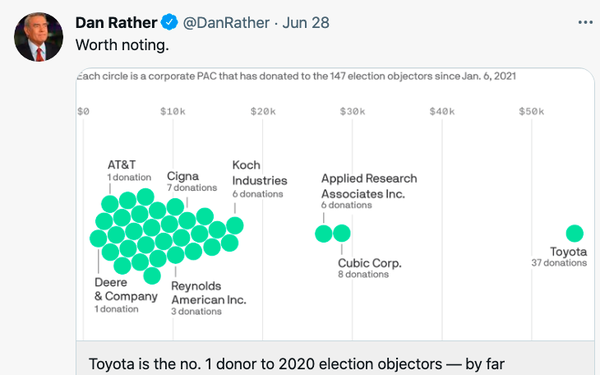 I’ve never been the biggest Toyota brand ambassador -- and only inherited the family Prius as a “station car” when my wife traded up to a Subaru -- but following revelations that Toyota is the No. 1 donor to 2020 election objectors in Congress, well, I just don’t feel comfortable driving that nameplate any more.

Don’t get me wrong -- the Prius is a well-engineered car (a Tesla showroom representative once pointed out to me that it has the lowest drag coefficient, even better than a Tesla’s), and its gas mileage is incredible.

But driving a Toyota is a drag now that I know -- thanks to an Axios expose -- that it is the No. 1 contributor to Republican legislators who objected to certifying the Presidential election, and it has continued to do so following the January 6 insurrection.