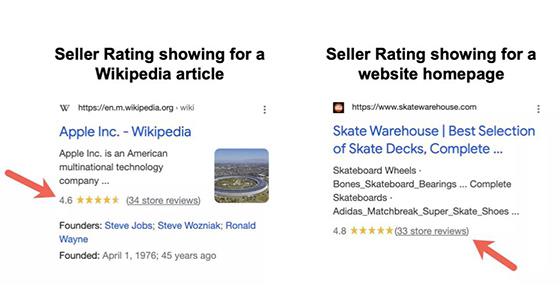 “This is a test of a feature that shows seller ratings, when available and relevant,” a Google spokesperson wrote in an email to Search & Performance Marketing Daily. “There is no charge for rating to appear. They are not ads.”

The test is one of many Google does frequently. If it becomes a regular feature, the company expect to share more about it then, the spokesperson wrote. Ratings are a feature of Google’s paid-search ads, making it a crossover into organic search.

In this instance, star ratings are shown in search engine results pages as part of the test based on the website’s rating in Google Merchant Center.

The test is significant because Google took a paid-search feature and adapted it to test in organic search.

Google explains that seller ratings on Shopping may be based on either Google Customer Reviews, a free program that collects post-purchase reviews on behalf of merchants; aggregated performance metrics from Google-led shopping research; or Shopping reviews for a store domain that includes reviews from various third-party sources and users of Google Search.

"When researching other examples of this test, I looked back to my post from March to be able to do a comparison of what some of these pages now look like with the reviews attached to them," Clark wrote.

"From an outsiders perspective, the reviews snippet looks similar to how Structured Data rich results when using Product Structured Data with AggregateRating operate," he explains. "With the difference of the underlining of review count and the ‘store reviews’ inclusion – making it more obvious of the click-through ability."

He provided several examples for brands--all have a 4.6 rating.

"This makes sense, because you actually have to approve reviews in tools like Yotpo which are supported by Google within feeds, he wrote. "So you’re unlikely to get many 1 star ratings for sites overall when showing on web pages."

It also confirms what Clark has been saying for the past few years--how SEO professionals need to have a good grasp of Merchant Center and product feeds, especially if working with eCommerce clients, despite the fact they work to optimize search engine content rather than paid search ads.