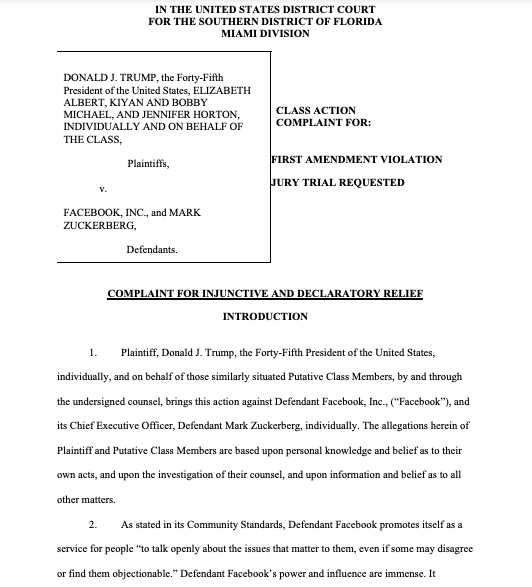 In three separate complaints filed Wednesday in federal court in Miami, Trump alleges that Facebook, Twitter and YouTube are “state actors” -- meaning equivalent to the government -- and that their editorial decisions regarding what content to allow on the platform amount to unconstitutional censorship. Several other people and organizations that used the platforms joined Trump's complaints, which were filed as potential class-actions against the companies as well as their CEOs.

Facebook, Twitter and YouTube took down Trump's accounts after insurrectionist rioters stormed the Capitol in an effort to prevent the Senate from certifying President Joe Biden's victory in the last election. Earlier this year, Facebook's oversight board -- a panel appointed by the company -- declined to recommend reinstating Trump's account. Facebook subsequently announced that Trump's account would remain suspended until at least January of 2023.

Trump alleges in the complaints that it's now "considerably more difficult” for him to "act as head of the Republican Party, campaign for Republican candidates, fundraise, and lay the groundwork for his own potential campaign run for the 2024 Republican Party nomination for President of the United States.”

In the Twitter complaint, Trump specifically alleges that he used the microblogging service “to communicate directly with the American people more than any other President in U.S. history,” and that “supporters and critics alike were welcome” on his page, except for the seven people who sued him for blocking them. (The Knight First Amendment Institute at Columbia University successfully sued Trump in 2017 on behalf of those seven users.)

The ex-president's new cases against the tech platforms aren't likely to get much traction in court, according to Santa Clara University law professor Eric Goldman, an expert in internet law.

Goldman says tech companies have prevailed in every lawsuit brought so far by people who sued over content-related decisions. Judges in many of those instances have held that only the government, and not private companies like Facebook, are bound by the First Amendment's ban on censorship.

"There's been an unbroken string of defense victories," Goldman says.

In the lawsuits brought Wednesday, Trump attempts to characterize the tech companies as "state actors" -- and therefore subject to the same restrictions against censorship as the government -- on the theory that they were pressured by Democratic lawmakers.

Courts have rejected similar arguments in other cases, Goldman says.

That organization -- which says it advocates “for informed patient consent based on full disclosure of all relevant medical information" -- argued that Facebook was a "state actor" on the theory that it was coerced into taking action by Rep. Adam Schiff (D-California), who had accused it of enabling the spread of anti-vaccine propaganda on the service.

The judge disagreed, writing that Children's Health Defense didn't allege that Schiff, or anyone else in the government, “directed Facebook or Zuckerberg to take any specific action” regarding the organization's Facebook page.

What's more, judges have also held that social media companies have their own free speech rights to exercise editorial discretion over the material on their platform. For example, last week a federal judge struck down a Florida law that would have prohibited large platforms from banning politicians' accounts.

Trump claims in the lawsuits that Section 230 represents “an unconstitutional delegation of authority” by Congress, and calls the law “a blank check issued to private companies holding unprecedented power over the content of public discourse to censor constitutionally protected speech with impunity.”

He is seeking a declaratory judgment that Section 230 is unconstitutional, and an order requiring the companies to restore his account, along with accounts of everyone else who was “wrongly restricted or curtailed” since June 1, 2018.