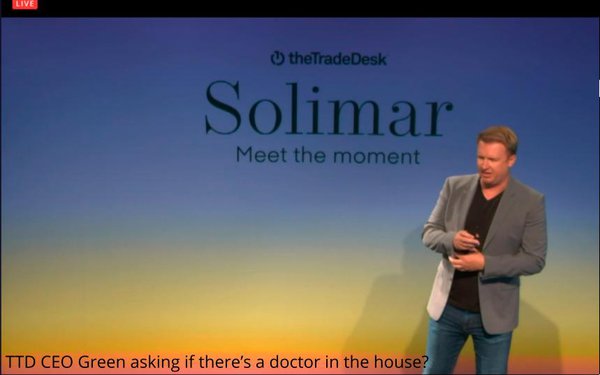 During a long, rambling and occasionally emotionally charged new product presentation Wednesday, The Trade Desk CEO Jeff Green spoke about the unique existential moment for the ad industry, his family, and the future of the "open" internet -- all to unveil a new DSP.

Minutes into Green's presentation, his new product unveiling was interrupted by a medical emergency involving a live audience attendee, causing him to ask from the stage, "Do we have a doctor here?"

After sounds of chairs rustling, Green said, "We're going to pause for a moment," and the live video feed cut to a test pattern-like placeholder screen until Green reappeared, noting: "Everyone seems to be okay there. I think everyone is going to be fine," and proceeded with the product pitch.

The pitch was for a new DSP named Solimar, which is a Mexican word mashing up sun and ocean, but which Green said represents a moment of opportunity for the ad industry to correct some imbalances that exist between advertisers and the big "walled gardens," as well as burgeoning consumer privacy and control issues, as well as the future of the world's most premium content: television/connected TV, music, and even viable journalism publishing.

Incessantly repeating the significance about the current moment in time, Green spoke about all the great things TTD has done to help preserve the "open internet" for publishers and advertisers, how it altruistically developed and donated a new unified ID standard to the industry, and credited TTD -- as well as Google -- for the success of the ad industry's deployment of the IAB Tech Lab's ads.txt device to prevent advertising fraud.

He spoke about being a parent and a good corporate citizen and about improving the digital advertising "supply chain" so advertisers can be less reliant on platforms like Google, Facebook and Amazon, and have more control over data showing how their digital advertising performs.

What he did not speak about in much detail is what Solimar does, other than noting that it took 18 months and hundreds of engineers to build "for the modern marketer in this very moment."

He also likened it to the moment when Steve Jobs created the Apple App Store.

In terms of explicit product points, Green ticked off several, including:

"Solimar is a product that is meeting this moment," Green reiterated, concluding his presentation. "It’s giving you and your team a chance to shine."