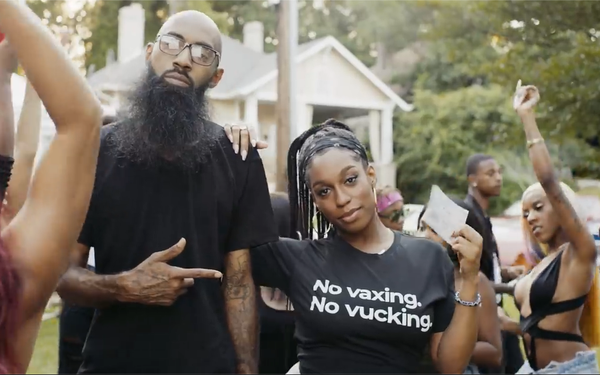 BLK, a dating app for Black singles, surveyed its users in April, asking if they were vaccinated and if they wanted their partners to be vaccinated. In the 18- to 24-year-old demo, 71% did not plan on being vaccinated.

The app was working with a newly launched agency, Majority, on an unrelated project at the time and asked them for ideas to educate their audience about the vaccine.

And so begins the origin story to this summer’s catchy, throwback vaccine anthem, “Vax That Thang Up.”

A play on Juvenile’s 1998 hit, “Back That Thang Up,” the idea to change the lyrics to something conversation-starting about the vaccine came easily, but was not expected to see the light of day.

“We thought it was a fun play on words," said Omid Farhang, founder of Majority, an agency he co-founded with Shaquille O’Neal.  “We didn’t think the slide would be chosen, but we did think it would give meeting attendees a chuckle. It was the 107th slide in a 108-slide pitch. It received an almost immediate yes and it was then fleshed out and pitched to the CEO of Match.com, who also loved it,” continued Farhang.

This was the first project to emerge from the fledgling agency. Its long-shot pitch for vaccine education has close to 2 million views two days after launching.

The “vaxmix” reunites Cash Money Records' artists Juvenile and Mannie Fresh, both featured on the original track, and No Limit Records star Mia X. This is the first time that artists from Cash Money and No Limit have collaborated on anything.

The track opens with the iconic "Back That Thang Up" beat. Juvenile and Mannie Fresh serve up catchy lyrics like, “feeling freaky all night you gotta vax that thang up,” and “girl you can be the queen after quarantine.”  Mia X closes things out rapping, “If you wanna get sticky and hot, go, go, go, go get the shot.”

“We knew we wanted a female presence on the track, and Mannie called up Mia X and she showed up at the studio 20 minutes later,” recalled Farhang.

“The original song spans generations and races, and we knew it would be the perfect song to reach the masses,” said Jonathan Kirkland, Head of Brand & Marketing at BLK.

Kirkland noted that BLK plans to do another survey of its users in a month to see if any minds are changed about getting vaccinated.

One thing Farhang learned from this inaugural project was that "big work doesn’t have to come from a big agency. We had five employees when this was created. [The agency now has seven]. Less people means less complexity and less friction.”