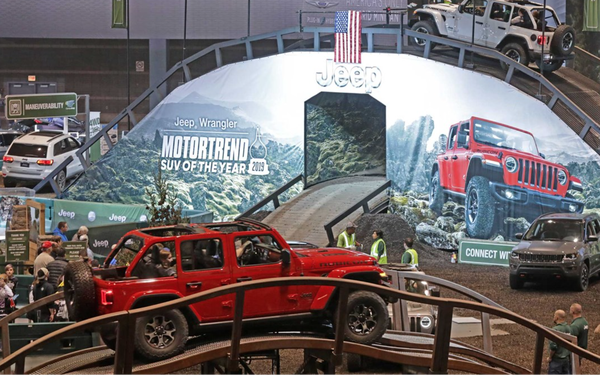 This year will be vastly different since it's being held in July with an abbreviated schedule, and many executives are not attending.

But after 18 months of no auto shows, you have to start somewhere. I give the Chicago organizers and automakers credit for taking the plunge.

The 2021 Chicago Auto Show special edition marks one of the first live events to take place in McCormick Place since the pandemic.

“As we planned, we understood that our show would be smaller because several automakers are sitting out the 2021 show season,” said Mark Bilek, senior director of communications and technology for the Chicago Automobile Trade Association. “In addition, we knew we’d have a shorter show because of the tight schedule at McCormick Place. Finally, we knew that we’d need to add an outside element to facilitate attendance as we emerged from the pandemic.”

This year’s show will take place in the McCormick Place’s West Building which has “a right-size show floor” and immediate access to Indiana Avenue, which will give attendees easy access to test drives, including the world debut of Ford Motor Co.’s  “Built to Electrify” and “Built Wild” Bronco consumer activations.

A key highlight of the "Built Wild" Bronco experience is a Bronco off-road course, personally designed by racecar driver Vaughn Gittin Jr., where visitors will experience the Bronco family and take on a 38-degree high “Bronco Mountain” with professional drivers.

Stellantis is bringing back its indoor test tracks at the show, including Camp Jeep and Ram Truck Territory.

Camp Jeep has been a Chicago Auto Show staple since 2005. It features an 18-foot, 35-degree “mountain” where passengers experience the off-road and traction capabilities of Jeep’s latest vehicles, including the brand-new 2021 Wrangler 4xe plug-in hybrid SUV and 2021 Gladiator pickup.

Jeep and Volkswagen are each having press conferences while Ram, Toyota, Nissan, Lexus and Ford will offer media a “walkaround” of their exhibits.

Toyota will display an array of new vehicles including the all-new 2022 Corolla Cross, GR 86 the Tacoma TRD Pro 3.0 and Tacoma Trail Edition and 4Runner TRD Sport, all making their first auto-show appearance.

Lexus will showcase its full line up of luxury vehicles at the 2021 Chicago Auto Show, including the all-new 2022 Lexus NX and IS 500 Performance Launch Edition, making their first auto show appearance.

Consumers will be able to see “an all-new Nissan brand” in one place for the first time, including the Z Proto.

“After nearly two years of introducing products virtually, we are celebrating the chance to show these new vehicles on stage in Chicagoland,” said Craig Keeys, regional vice president, Nissan Midwest Region, Nissan U.S., in a release.

The Chicago Auto Show will open to the public July 15 and runs through July 19. The media preview is being held July 14.