Facebook Ad Targeting Bounces Back In Wake Of Apple iOS 14.5 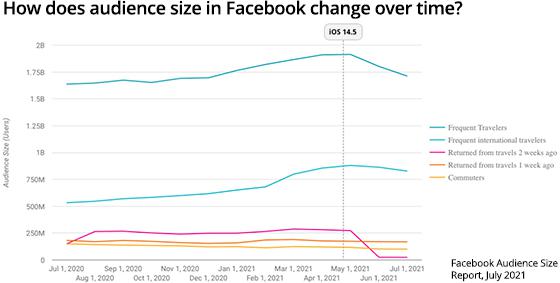 Brands have reported a decline in the size of their remarketing audiences as a result of Apple iOS 14.5 release and its app tracking transparency (ATT) feature. Some say audiences on Facebook and Instagram have fallen below the minimum needed to serve ads, according to a report released today.

The Ad Bacon Facebook Audience Size Report for July 2021 offers a view into how Facebook audience segments have changed over time, including a specific focus on trends since the release of iOS 14.5. It explains trends in ad performance and identifies audience growth.

The launch of iOS 14.5 in April 2021 had no notable impact on the engaged shopper audience. Itt remained near the highest level during the last 12 months, according to data released today by Ad Bacon, a digital ad optimization company.

Analysts identified a 5% decline from May to June, but the audience size rose to a level similar to the one seen during the last few months. Based on the data, ATT didn’t cause a steady decline some advertisers feared, which suggests Facebook may remain an effective platform for brands to target audiences based on shopping propensity.

Despite a decline in re-marketing, Facebook’s demographic and behavioral targeting segments are becoming increasingly resilient, mainly given the massive data network Facebook created across its properties.

On the first day of each month, Ad Bacon’s platform, Audience Kitchen, takes a snapshot of the official audience size reported by Facebook's Marketing API. Facebook defines audience size as the "estimated size of the target audience" and it refers to worldwide population unless otherwise stated in the report. Analysts plot the audience size on a line graph to illustrate trends over time.

How did the audience size in Facebook change since Apple launched ATT?

In the monthly snapshot analysts recorded on June 1, roughly one month after the April 26 release of iOS 14.5, Facebook's Marketing API reported an audience population size of 30,172,097 people in the official Facebook target audience segment titled "Household income: top 25%-50% of ZIP codes (US).” In the July 2021 monthly snapshot, the audience size rose by 4% to 31,172,386 people.

The report covers segments such as household income, family status, life events, industries. It looks at behavioral trends such as engaged shoppers, mobile use, U.S. political engagement and travel.

“I was surprised to see a downward trajectory of frequent travelers during a time when travel is generally increasing by other measures, such as Google searches for flights,” Martin said. “Most other audiences haven't followed the same trend. Since the downturn roughly follows the release of iOS 14.5, it makes me wonder if app tracking transparency may potentially be impacting Facebook's ability to identify travelers in particular.”

It commonly fluctuated up and down over time by 5% or more per month, which makes it difficult to attribute changes to specific factors, such as ATT. He said a combination of factors are likely at play, but the most important takeaway: Despite all the worry by advertisers, ATT hasn’t caused the steady plunge some feared.

When asked what should marketers focus on, Martin said most audiences remain highly targetable. Audience segments may remain effective mechanisms to reach a large addressable audience in a privacy-forward world. If a brand has a downturn in campaign performance, it’s likely caused by other factors.