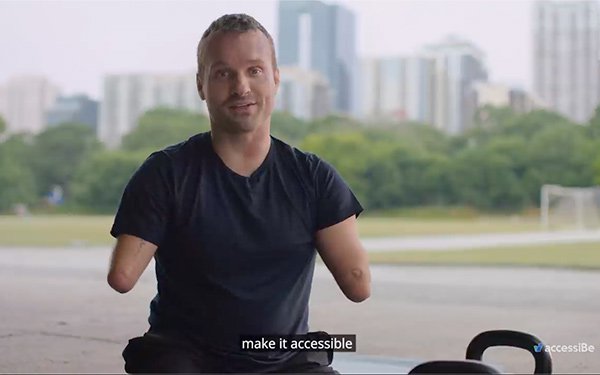 The company teamed up with Borax Creative Filmmaking to create a national ad campaign describing its mission while using notable people in the disabled community, including Paralympians and Broadway actors. People with disabilities were also used in roles behind the scenes as writers and producers.

“Unstoppable” launched July 12 in the midst of Disability Pride Month and will run nationally for eight weeks. A 60-second ad targets people with and without disabilities and includes a cameo from accessiBe’s chief vision officer, Michael Hingson, a 9/11 survivor who is blind.

Entrepreneurs, athletes, community leaders, artists, and organic farmers, who are also disabled, describe how they are unlikely to be able to use a typical website for online shopping, dating, resume submissions, or ordering food.

The ad concludes with a description of accessFind, a search engine created for end-users with disabilities, and how websites can register for a free trial of service.

“Despite web accessibility being a critical topic, especially as people continue to do almost everything online, conversations around it have not yet entered the mainstream TV world,” said Shir Ekerling, CEO of accessiBe. “‘The Unstoppable’ campaign aims to open the hearts and minds of business owners to acknowledge the importance of web accessibility.”

Founded in early 2018, accessiBe’s proprietary technology scans and modifies websites’ behavior in real time, to be accessible for people with disabilities and compliant with the ADA and WCAG 2.1. Additional widgets allow users with disabilities to customize their independence based on personal needs and preferences. Pricing starts at $49 a month.