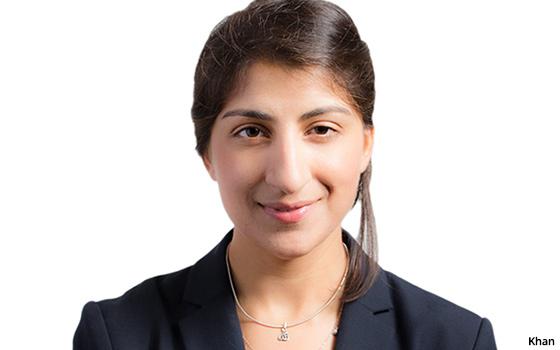 Facebook is seeking to disqualify Federal Trade Commission chair Lina Khan from participating in any decisions regarding the agency's antitrust lawsuit against the company.

“Due process entitles any targeted individual or company to fair consideration of its factual and legal defenses by unbiased Commissioners who, before joining the Commission, have not already made up their minds about the target’s legal culpability,” Facebook wrote in a petition filed Wednesday with the FTC. “When a new Commissioner has already drawn factual and legal conclusions and deemed the target a lawbreaker, due process requires that individual to recuse herself from related matters when acting in the capacity of an FTC Commissioner.”

The move comes two weeks after Amazon also requested that Khan be disqualified from investigating or prosecuting antitrust claims against the comapany, and reiterates many of that company's arguments about Khan.

Before taking the helm of the FTC last month, Khan was among the most prominent critics of large tech companies, and a proponent of aggressive antitrust enforcement.

She was among the counsel to the House Judiciary Committee’s antitrust subcommittee, which accused large tech companies of squelching competition in a report issued last year.

Facebook's request comes two weeks before the FTC's deadline to file an amended antitrust complaint against the company.

The FTC alleged in a lawsuit filed late last year in federal court in Washington, D.C. that Facebook violated laws aimed at protecting competition. The case largely centered on allegations that Facebook maintained a monopoly in the social networking market by acquiring acquired potential rivals -- including social-media service Instagram (purchased for $1 billion in 2012) and messaging service WhatsApp (bought for $19 billion in 2014).

U.S. District Court Judge James Boasberg in Washington, D.C. dismissed the claims last month, ruling that the FTC's allegations, even if proven true, wouldn't show Facebook has monopoly power in the market for personal social networking services. He gave the FTC until July 29 to amend its claims and refile them.

Facebook now argues Khan “cannot meet any standard for neutrality that would permit her to participate in any decision making regarding the FTC’s pending antitrust litigation.”

The company's petition calls attention to an article she co-authored in 2019, “A Skeptical View of Information Fiduciaries,” that makes several critical statements about Facebook and other tech companies. That article includes the statement that “dominant online platforms have been credibly associated with a host of social ills,” including facilitating interference in elections, inciting genocide in Myanmar, and enabling discrimination.

“A disinterested observer would conclude that she could not revisit her conclusions about Facebook with an open mind now that she is the FTC Chair,” the petition states.