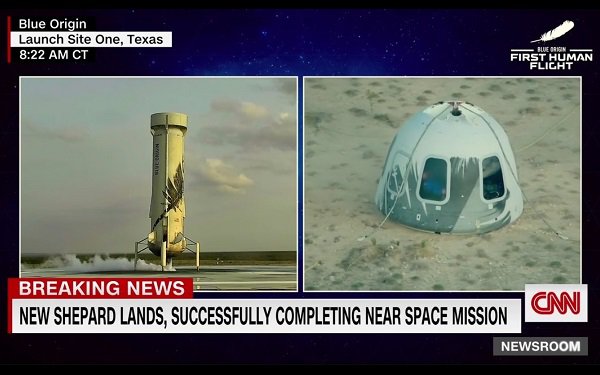 Jeff Bezos and his space-travel dreams got oodles of free publicity Tuesday morning as TV turned its cameras on the launch and ever-so-brief first manned flight of his Blue Origin space capsule -- with him inside.

You can’t blame the networks for making this midsummer rocket launch an all-hands-on-deck affair.

It had all the earmarks of a great story: The world’s richest man risking life and limb in an attempt to do for space travel what he did in the terrestrial world of retailing and shopping, against the backdrop of two other flamboyant billionaires -- Richard Branson and Elon Musk -- also investing heavily in their own outer space thrill-seeking.

The public was no doubt interested too, and it is likely that millions watched this first-thing-in-the-morning launch followed by the dual, separate touchdowns of the Blue Origin rocket, upright on a landing pad and ready to be used again, and the capsule named New Shepard that parachuted gently Earth-ward onto the barren scrub land of East Texas. (Both descents are pictured above.)

The whole thing -- from launch to landing -- took somewhere in the neighborhood of 15 minutes (between 9 a.m. and 9:30 a.m. EDT), which meant that the viewing multitudes could take it all in at home or on the go, and then return in short order to their regular weekday plans that were already likely in progress.

Mission accomplished? Sure, why not? The coverage blanketing the major networks was one of those rare opportunities for a nation starved of good news (or at least diverting news) to share in something unusual for a change.

And luckily, there were no mishaps such as -- heaven forbid -- a blowup of the whole thing and in the aftermath, a much worse story and national shared experience than anyone bargained for.

Happily, this was not to be, however, and Bezos and his co-passengers were seen on TV plopping down on the terra firma in a cloud of East Texas dust and then disembarking from their capsule a few minutes later to the cheers and hugs of loved ones and Blue Origin personnel.

What are we to make of all the hip-hooray and ballyhoo that the networks devoted to this bazillionaire and his outer-space ambitions?

In the admittedly unscientific sampling I undertook of the coverage on the various broadcast and cable networks (which I watched via their web sites, not their TV channels), nary a discouraging word was heard about this blink-and-you-missed-it “space” flight.

Nor did I hear anyone invoke the phrase “ego trip” in commenting on this brief excursion, or suggest that Mr. Bezos and his vast resources might be invested elsewhere for the immediate betterment of, well, something other than fulfilling his apparent need for an 11-minute vacation in outer space.

Instead, the commentary from aviation correspondents and assorted university astrophysicists was all praise for the Amazon entrepreneur.

Some even framed it as a “small step for mankind” (invoking the Apollo 11 landing on the moon on the same day 52 years ago) that will help advance mankind’s quest -- which plenty of people do not support -- to someday colonize celestial bodies other than our own.

No one bothered to venture the opinion that based on the mess mankind has made of its own planet, maybe we should warn the rest of the universe that we’re coming.

amazon, tv
1 comment about "Billionaire Space Jam: The Hip-Hooray And Ballyhoo".
Check to receive email when comments are posted.
Next story loading