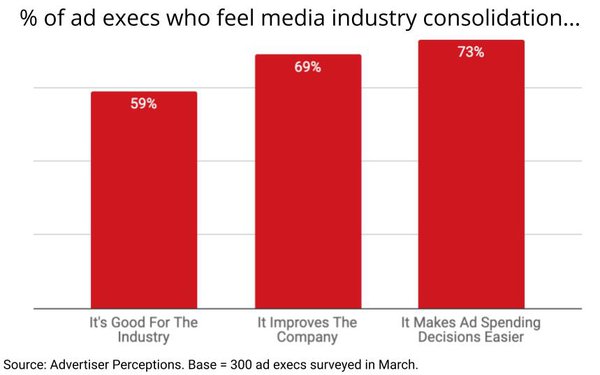 At a time when federal regulators and consumer advocacy groups are eyeing break-ups of the industry's biggest media conglomerates, ad executives overwhelmingly deem media industry consolidation to be a good thing for the industry, as well as for advertisers.

The findings, which are based on surveys that Advertiser Perceptions conducted among 300 advertiser and agency executives in March, precede some recent antitrust signals that federal regulators have begun sending about the dominance of companies including Facebook, Google, Amazon and others, as well as AT&T's and Discovery's deal to consolidate TimeWarner Discovery into one giant media conglomerate.

Even so, ad executives seem amenable to further media industry consolidation, with the biggest reason being that it makes it easier for them to make their ad-spending decisions, a factor cited by nearly three-quarters of respondents.

A majority of the respondents also cited improving the overall company, as well as it being good for the industry as main reasons they are in favor of further industry consolidation.

Advertiser Perceptions analysts said the biggest factor driving the responses is that "advertisers put ease of doing business with a media company first."

They also cited the need to have a "single point of contact who understands and can navigate the company's complete offerings," as an important secondary reason.

"A consultative approach comes third, pricing comes fourth, and knowing the client’s business is at the bottom of the list," the analysts noted, adding that the respondents rated big media suppliers Google and Meredith as "the best companies to do business with."

“Advertisers want all that big media companies have to offer, but they don’t want to navigate a labyrinth of channels to get it,” Advertiser Perceptions Vice President-Business Intelligence Erin Firneno stated, adding: “They’re saying, ‘I want you to be an expert at what you have and what you offer and how it will affect my business.’

The providers with salespeople who understand the full range of their companies’ media offerings have a real edge now.”