The Darwin Media Awards: And The 'Winners' Are.... 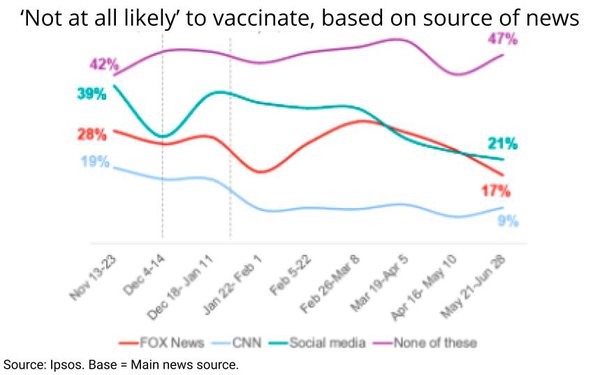 One of the most troubling patterns to emerge from Ipsos' ongoing tracking of America's political division in recent years has been how people have developed "alternate realities" based on their primary sources of news, even to the point of denying scientific facts about the COVID-19 pandemic. As alarming as that was when Ipsos first shared that insight in October 2020 heading into the Presidential election, nine months later, it may actually be killing people. Specifically, Ipsos' top political expert shared data today showing the percentage of Americans "not at all likely" to get vaccinated for the virus based on their primary source of news.

While the percentages have shrunk even among people who primarily get their news from Fox News and/or social media, they still remain pretty high. Even more troubling is the percentage of Americans who don't get their news from a primary source, but instead rely on friends and family. The percentage of those Americans who are not at all likely to get vaccinated has actually expanded to nearly half (47%) despite the fact there are even more infectious COVID-19 strains circulating.

During a webinar providing one of his periodic updates today, Ipsos' Chris Jackson described this segment as "people who don't get news from any normal news source... a hodgepodge of social media, friends, etc.," adding that it is a real problem for public health officials, because, "How do you reach people who aren't necessarily plugged into the media."

As concerning as that may be, Jackson said that overall, Americans have shifted their top concern away from COVID-19 toward a melange of issues ranging from the economy, jobs, inflation, crime, policing, etc., largely because so many have gotten vaccinated and American society has been reopening.

He said the economy overall appears to have resumed its position as the No. 1 issue on the minds of Americans, but that society is remains highly fragmented about what's most important.

While he did not go through the problem of news sources on an issue by issue basis, he did identify how at least one -- the debate surrounding whether to teach critical race theory in schools -- has been distorted based on the primary news sources of Americans.

Overall, he said Americans are extremely ignorant about the facts of critical race theory -- a concept that is more than 40 years old -- but has recently morphed into a new political lighting rod.

When Ipsos polled Americans on seven true/false facts about it, he said less than a third of all Americans answered four out of seven questions correctly, a number that fell to 23% for Fox News viewers and/or other conservative online news sites (see chart below).

Oddly, when the term "critical race theory" is removed and people are asked whether they believe racism and/or slavery should be taught in schools, Jackson said most Americans -- even those who primarily get their news from conservative news outlets -- agree.

"Most people don't know a lot about it," Jackson said of Critical Race Theory, but that hasn't stopped them from turning it into a political debate.

"They're getting carried away with something most people don't know anything about," he said. 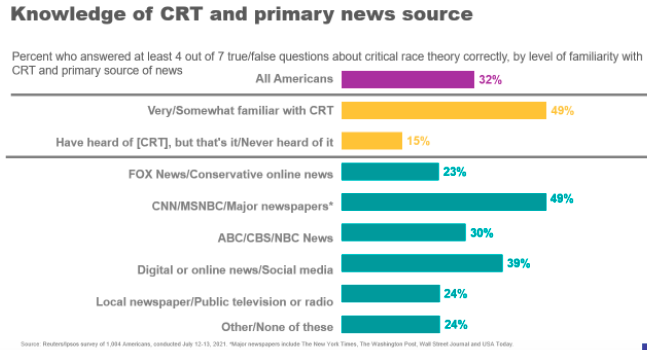