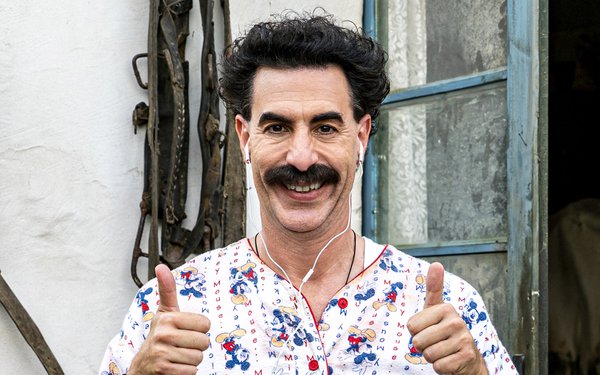 Actor Sacha Baron Cohen wants a Massachusetts marijuana dispensary to pay him at least $9 million for using an image of his “Borat” movie character on a highway billboard without his permission.

Somerset-based Solar Therapeutics Inc. posted the billboard in early April and removed it about three weeks later after Cohen’s attorneys complained about the image of Borat with his thumbs up accompanied by the words “It’s Nice!” — akin to Borat’s frequent term “Nice!”

What’s not nice, according to the suit filed last week in U.S. District Court in Massachusetts, is that Cohen would never promote marijuana because he has never used it and “does not believe it is a healthy choice.”

Moreover, being an observant Jew, Cohen doesn’t want to get involved “in the heated controversy among the Orthodox Jewish community about whether cannabis can be used under Jewish traditions, customs, and rules — a controversy in which many rabbinical leaders have stated that cannabis use is a violation of Jewish law.”

Cohen’s Please You Can Touch, LLC alleges that Solar is liable for copyright infringement, false advertising and misappropriation of publicity rights. Solar president Edward Dow III also is named as a defendant.

“By use of the Billboard, the Defendants falsely have conveyed to the public that Mr. Baron Cohen has endorsed their products and is affiliated with their business,” the suit states.

“To the contrary, Mr. Baron Cohen never has used cannabis in his life. He never would participate in an advertising campaign for cannabis, for any amount of money.”

Cohen has turned down “countless opportunities to license his name and/or likeness for other commercial advertising in the United States”—including a $4 million offer to appear in a car commercial, according to the suit.

“He believes such advertising would weaken his credibility as an actor and as a serious social activist.”

To justify the plaintiffs’ sought-after payment of at least $9 million, the suit notes that basketball superstar Michael Jordan won an $8.9 million judgement from an unidentified grocery chain for a magazine advertisement that included Mr. Jordan’s image without his permission.

That’s an apparent reference to Jordan’s suit—settled in 2015—against Chicago-based Dominick’s Finer Foods regarding a 2009 ad in Sports Illustrated magazine.

When Marketing Daily reached out to Solar for comment, the company provided this statement from the DarrowEverett LLP law firm: “Upon receipt of the cease and desist letter from Mr. Cohen’s legal counsel, Solar immediately requested that the sign company remove the billboard in question.

“As there is an active case before the court, we have no further comment at this time.”