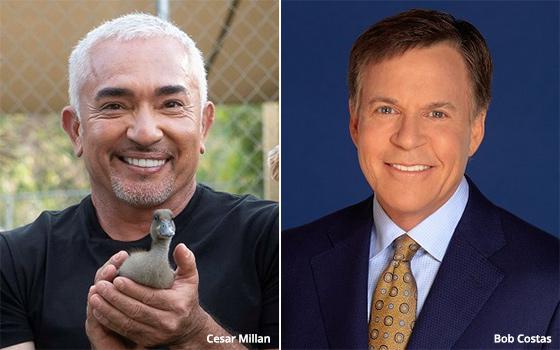 The exploding world of video content, based on the perpetual and never-ending need of our numerous networks and streaming services to always be offering more, has created a very vibrant production industry.

Among the beneficiaries of this boom time are just about anybody with a previous track record in television, whether behind the scenes or in front of the cameras.

This week, two out-front personalities who have been around for a while will be returning to TV with new shows. They are both top talents in their respective fields.

But in the not-too-distant past, when TV shows and the platforms to show them on were not nearly as numerous as they are now, who is to say whether these two stars -- Cesar Millan and Bob Costas -- would be coming back yet again to do new shows that are not unlike what they have already been doing for many years? And yet, here they are.

Cesar Millan, 51, the dog trainer sometimes known as “the dog whisperer,” has been training dogs on TV in a string of TV shows since 2004.

Now he is returning to TV to work his uncanny, otherworldly magic on a whole new generation of unruly canines.

His new show is titled “Cesar Millan: Better Human Better Dog,” premiering Friday (July 30) at 9 p.m. Eastern on National Geographic and NatGeo Wild. The Friday night episodes on the NatGeo channels will then stream on co-owned Disney+ the following Wednesday.

On the show, Cesar will not only turn his attention to out-of-control dogs (including a cantankerous blind chihuahua). He will also counsel their owners on how to alter their own behavior to improve the living environments for their stressed-out pets.

Meanwhile, Costas, 69, returns to TV this coming Friday with a new topical talk show on HBO. Called “Back on the Record with Bob Costas,” plans call at present for only four episodes of the show per year, according to an HBO press release.

On the show, Costas will converse “with the biggest names in sports,” says HBO, as well as lead roundtable discussions about “the sports world and beyond” and deliver some of his “signature commentaries.”

It is Costas’ second go-round on HBO -- a factoid reflected in the title of his new show. His old HBO show, which aired from 2001 to 2004, was called “On the Record with Bob Costas.”