'Bolt To The Bar' For A Free Michelob Ultra On Saturday 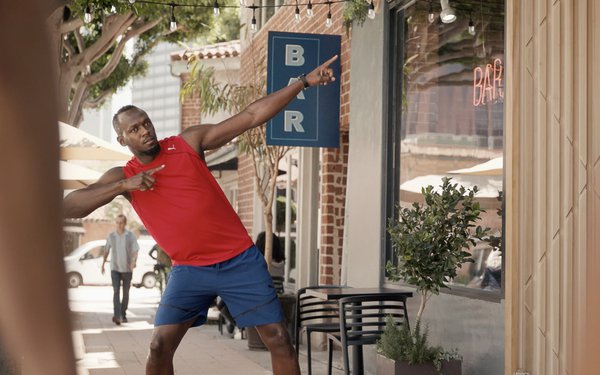 Amid all its other problems, the Tokyo Olympics also must do without now-retired “fastest man alive,” Jamaican sprinter Usain Bolt. But Bolt won't be missing from TV screens entirely, thanks to a Michelob Ultra “Bolt to the Bar” campaign timed to NBCUniversal’s Olympics coverage.

In :30 and :15 spots running on NBC, CNBC, NBCSN, Olympic Channel, USA, Telemundo, Universo and other networks, Bolt directs amateur runners into neighborhood bars as they finish their workouts.

As part of the campaign, this Saturday, July 24, bar-goers who purchase Michelob Ultra will get reimbursed with a prepaid card (up to $5) after uploading their receipts to UltraBeerRun.com.

Calling this stunt Bolt’s “Running Tab, Michelob Ultra notes that receipts must be from on-premise consumption. No retail cans allowed.

The Bolt campaign is part of Michelob Ultra’s Beer Run program, which is giving out free brews all summer in exchange for proof of any exercise activity. To get a $5 prepaid card for Michelob Ultra, consumers download A-B’s MyCooler app, register, and upload a selfie, screenshot of a fitness app, or a workout summary to prove they’ve worked out.

The Ultra Beer Run is itself being promoted with :30 and :15 spots, plus  OOH, social media giveaways, retail activation and experiential. The campaign kicked off in mid-May with Michelob Ultra rewarding runners with free beer in New York City and Chicago.