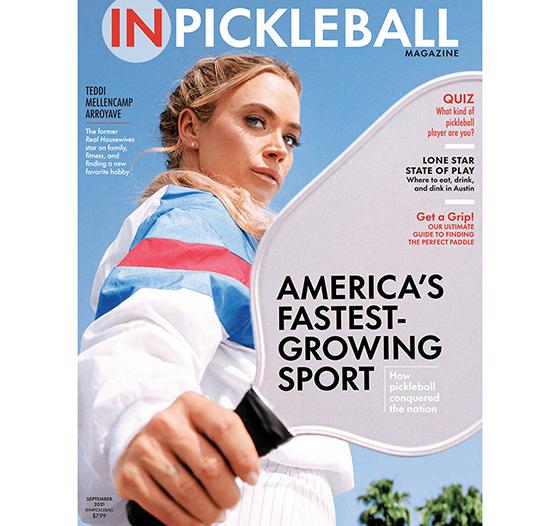 Pickleball lovers are being offered a whole new brand devoted to the sport: In Pickleball, consisting of a print publication, online magazine, interactive website and social platforms.

Pickleball is a tennis-like game played with whiffle balls and paddles. The In Pickleball team claims it is the fastest-growing sport in America, especially among people over 55.

In Pickleball is headed by J Armus, designer of The Oprah Magazine, Entertainment Weekly and Everyday with Rachael Ray, and Richard Porter, former CEO of Publishing Group of America and president of media sales at Meredith Corp.

It is being launched by an investor group In Pickleball LLC.

“Coming out of this pandemic, people crave a sense of community and escape,” Armus states. “Pickleball is an inclusive community that welcomes anyone who wants to experience the joy of playing.”

Featured in the inaugural issue is a 12-page spread on Teddi Mellencamp, "Real Housewives of LA" and daughter of pop star John Cougar Mellencamp, who has a court in her backyard. There also is a story on the Texas Hill Country’s pickleball community.

“We have a predominantly older audience that appreciates holding a magazine in their hand,” Armus continues. “We’re giving them a magazine they will want to keep turning through, a website with even more content and photography, and social platforms to share their personal stories.”

“Lifestyle magazines can’t compete with the pace of the digital newsfeed. We need to offer a more luxurious experience,” said Armus.

Pickleballers can get the debut issue for free at their clubs, then they can subscribe for $39.99 for 12 issues.