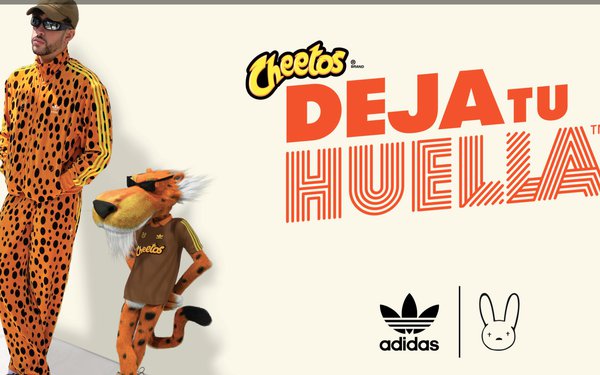 Adidas is turning the Bad Bunny and Cheetos partnership into what may be the messiest fashion mashup of the year.

Since last fall, the rapper has been appearing in Cheetos ads, urging fans to leave their orange-dusted mark on the world and keep breaking the rules.

The new Adidas collection marks the campaign's second phase. It’s inviting fans to "Deja tu Huella (Leave Your Mark)," as they try to win early access to the clothes, as well as offering a chance at $500,000 in prizes.

Cheetos is granting early access to the clothing to the first 100 fans who ask, but there's a twist. Fans have to upload a photograph of their orange-dusted fingertips to get lucky. If Chester can detect that the orange dust -- known to true fans as Cheetle -- is the real thing, they get to shop the collection before it moves to the general public.

Everyone else has to wait until early August to get their paws on that cheetah-print tracksuit.

The drop may be lighthearted, but there's a generous side, too. It includes a partnership with the rapper's Good Bunny Foundation and the Deja tu Huella Estudiante Fund, with plans to award $50,000 each to 10 students in the U.S. and Puerto Rico who leave their mark on their community.

Fans need to make a 60-second TikTok video that demonstrates the way they're having an impact on culture, community or the world, tagging @Cheetos, #DejatuHuella and #Entry to be eligible.

Bad Bunny, the breakout reggaeton star from Puerto Rico, was last year's most-streamed artist on Spotify, which says he notched more than 8.3 billion streams. And it says his album, "YHLQMDLG," scored as the year's No. 1 streamed album.

Bad Bunny isn’t the only rapper rocking Adidas’ world this week. Social media and the fashion press are buzzing with speculation about what may or may not happen between Kanye West and Nike.

Sneaker history fans may remember that the first Yeezy line came from West and Nike back in 2007, with the follow-up Air Yeezy 2 in 2012. In 2013, he defected to Adidas for a reported $10 million. There, his shoes have been massive hits, generating both gotta-have-'em availability scrambles and plenty of sales.

But in recent months, West has been making appearances in Nike footwear, not Adidas. He's also posting photos of Nike products on his Instagram feed. And a new ad for Beats Studio Buds features a teaser of West's new album, due next week. The ad starts with long close-ups of runner Sha'Carri Richardson's feet. The Nike athlete is, of course, wearing Nike.

Footwear News is calling the antics "a calculated marketing move."

West has five years left on his Adidas contract.