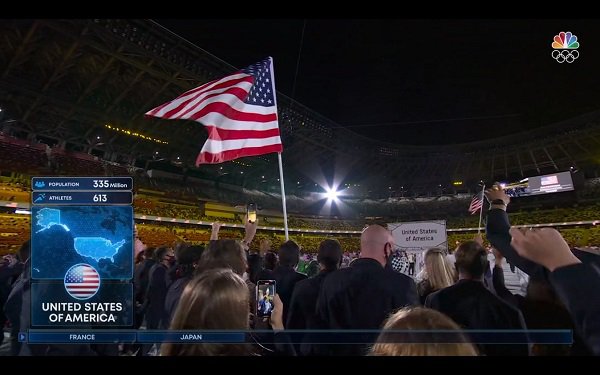 Much was made in the press over the weekend and earlier this week over the steep decline in the ratings that hit NBC's coverage of the Tokyo Olympics' opening ceremonies last Friday night (pictured above).

How steep? Various news stories reported a 36% decline in opening-night viewership compared to the opening ceremonies at the outset of the 2016 Summer Olympics in Rio De Janeiro.

The total audience amounted to 16.7 million, according to a MediaPost story (Digital News Daily, July 26). That would be a great number for any regular TV show, but not for an Olympics.

Then, as the competition got underway, subsequent viewership accounts reported that the ratings were on the rise. Another MediaPost story (Digital News Daily, July 27) reported a 61% increase in viewership over the opening-night numbers through Sunday.

And so it went. One night the numbers were off, and on other nights, they were not. So what happened on opening night? Here are couple of theories on that.

Despite the apparently robust ratings the opening ceremonies in Rio garnered five years ago, the pageantry of an Olympics opening ceremony in which the national teams enter the Olympic stadium might not have had the allure this year that it had in years past.

With everything that has been going on for the past year -- and most recently a troubling spike in COVID-19 cases -- perhaps many people were not in an Olympics mood this year.

In addition, the pre-publicity for the Games seemed more about COVID than the athletic competition to come. There were to be no audiences (or perhaps limited ones) at the Olympic venues this year, and many Japanese were seen on the news protesting the Olympics and holding up signs demanding that all the foreigners go home.

Then there were the opening ceremonies themselves. In our household, we watched them for only a few minutes before we bailed.

Why? Because unlike at past Olympics, this particular opening ceremony looked like a chaotic mess, as if no one had bothered to choreograph it so that it would play well on TV. It was very unattractive to watch.

Moreover, our world in general has been a chaotic mess for well over a year. I suppose we had hoped that the Olympics' opening ceremony would provide a counterpoint to that, but it did not.

Plus, opening ceremonies are not really what the Olympics are about anyway -- which might explain why the ratings took a turn upward as the competition got under way.

Since the Olympics come around only every four years (and in the case of these Olympics, five years), it can be easy to forget in that long period of time what makes the Olympics so special in the first place.

Sometimes we need a brief period at the outset of another Olympics to become re-acclimated to this sprawling event.

Just the other night, for example, without intending to, we caught a water polo match on CNBC, and actually watched a good deal of it. It is not a sport that I ever think about, but there it was, and the physicality of this clash in a swimming pool was not to be believed.

The same went for a few swimming races and gymnastics competitions that we saw Monday and Tuesday night. They served as reminders of why the Olympics represent something more than other championship-level competitions.

There is emotion, drama and incredible feats of strength. What more can a TV viewer ask for?